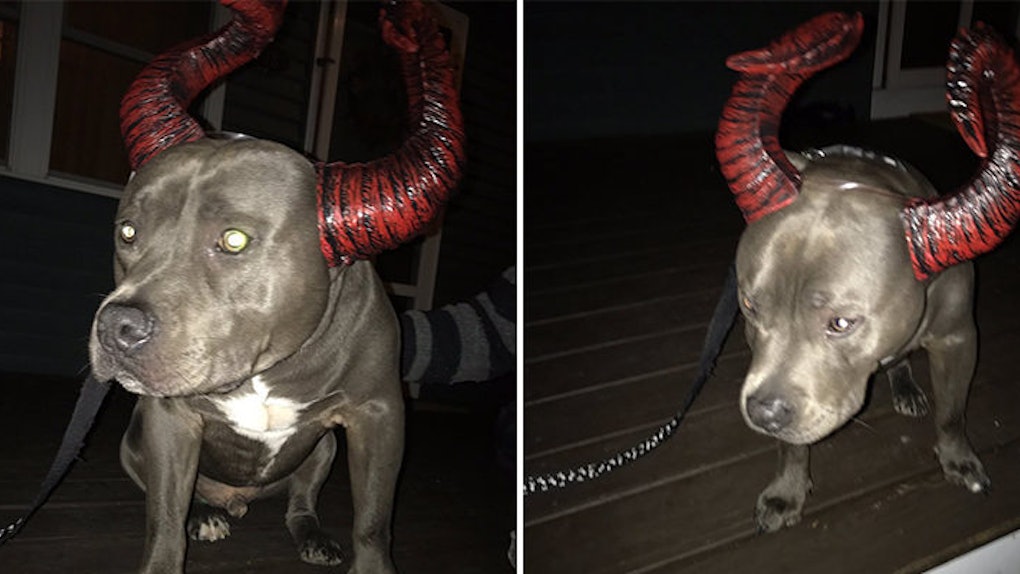 Pit Bull Feared By Kids Has Worst Halloween Ever

Pit bulls get a bad reputation as violent dogs, which means a lot of people are afraid of them.

To those people, I will now show this picture:

Yeah, look at that menacing creature who cares only about bloodlust and toddler-murdering.

Pit bulls have acquired this reputation because they are the dogs most often used in dog fighting.

They are also one of the most often abused dog breeds. And they don't deserve the trepidation many feel when around them.

Because of this misperception regarding pit bulls, they fill up shelters and have a lot of difficulty finding homes. It's, in a word, sad.

No trick-or-treaters wanted to pet him.

William tweeted out this utterly tragic picture of his dog Dublin, which quickly went tremendously viral.

People COULD. NOT. HANDLE. This.

People kept commenting with photographs of them crying.

William kept the sad tweets coming, following up his first soul-crushing post with this detail shot of the sadness in Dublin's eye.

I want to die.

This dog is going through basically the same thing this 9-year-old kid went through, when no one showed up for his birthday. This world is a cruel, brutal place.

Fuck you, God. (Sorry, God. That was a joke. You can take a joke, right? Of course you can. I mean, you DID make Gary Busey. Sorry, Gary.)

They are great, loving dogs, and the stigma around them being violent needs to end.

Finally he released us from the torment of his pup's suffering.

Apparently William's aunt made all the kids start petting Dublin in order to get any candy. The facts are in... money CAN buy you love.

(^That's the sort of weapons-grade comedy you can expect when reading an article I write.)

By the way, William is also accepting gifts for Dublin.

Because, as the old saying goes, where affection and compassion fails, sending a sad dog presents prevails.

Happy halloween, Dublin. I love you.