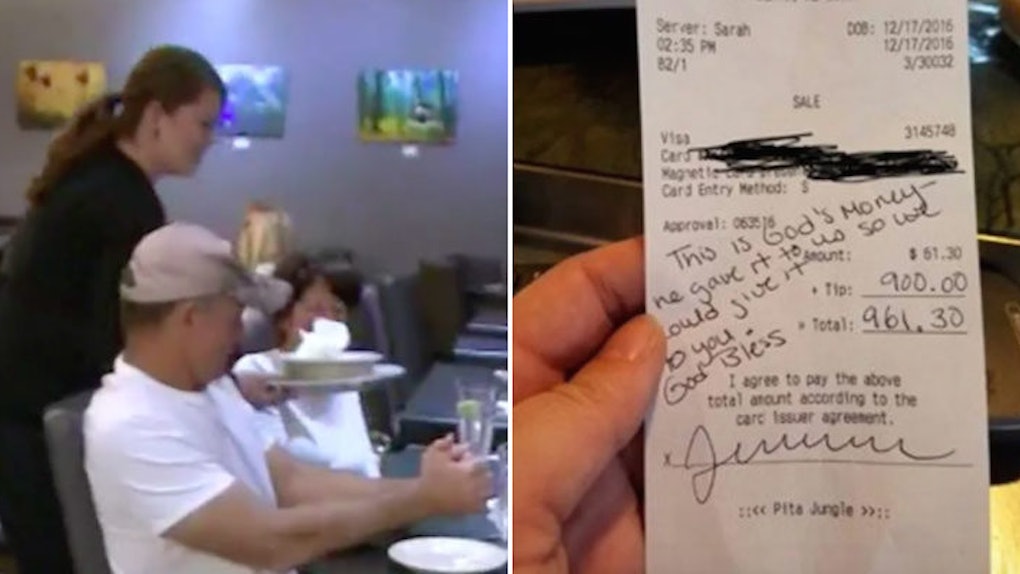 Sarah Clark was just working her regular waitressing shift at Pita Jungle in Phoenix, Arizona, when something extraordinary happened.

The couple had been looking for a way to pay it forward, 12 News reported, and decided Clark would be a perfect recipient.

The couple wrote on the receipt,

This is God's money — he gave it to us so we could give it to you. God bless.

Although $900 would be happily received by most people, it was especially useful for Clark.

Clark is nine months pregnant and due to give birth any day now.

But there is even more of a need than that. Her fiancé is going to get knee surgery.

With my being on maternity leave and him being out of work, it's just... you know, we're not going to be making any income. So this is really going to help us.

Clark beamed as she told 12 News,

I couldn't have asked for anything more right now. It's going to help with bills, with rent, with being able to stay home and spend more time with my baby.

Clark has seen the woman who gave the $900 tip at the restaurant before. She is also pregnant, and Clark had told her about her fiancé's injury.

She said when she saw the giant tip, she immediately broke down into tears.

Clark is supposed to have a daughter, named Rosalie, on January 8.

The holiday season is an especially prime time for paying it forward in moments like this. If there's something you can do to improve someone's situation — or simply to make their day with a free coffee — I hope you're inspired.