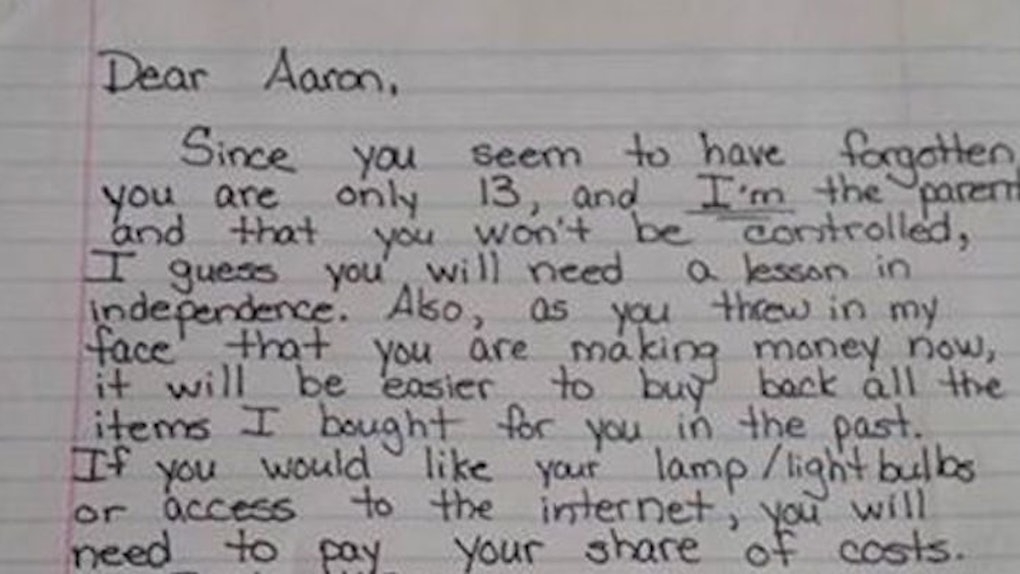 The worst days are the ones when your mom blows up your sky-high spot in the city that made you: the Internet.

Aaron was living way large before his mom, a woman going by the name Estella Havisham on Facebook, put an end to his life of luxury.

The single mother claimed her 13-year-old son was skipping school assignments, back-sassing like a man with nothing to lose and insisting he could support himself with dough stacks he acquired making YouTube videos.

Tired of his diva attitude, she wrote Aaron a letter to teach him the value of living under her roof.

The letter, which she posted to Facebook before changing her display name on the social networking site to Heidi Johnson, detailed the bills Aaron would be required to pay and the chores he'd have to do to be considered an independent member of the household.

The mother concluded her offer by writing,

If you decide you would rather be MY CHILD again, instead of roommate, we can renegotiate terms. Love, Mom.

In a follow-up post, she confirmed Aaron did not take well to the news, crumpling the note into a tiny rage ball and leaving in a huff. But he eventually came around, offering an apology and a will to compromise.

The over 86,000 Facebook users who liked the post found the mother's approach amusing, but for some it was too extreme.

In an additional post on Facebook, Aaron's mother clarified she never had any intention of casting her son out of their shared home if he failed to pay his bills.

Let's get serious!… I am not wanting him to pay anything. I want him to take pride in his home, his space, and appreciate the gifts and blessings we have. I wrote him a 'bill' to make a point. Nothing comes free.

Sometimes a baller just needs to be reminded how to act.