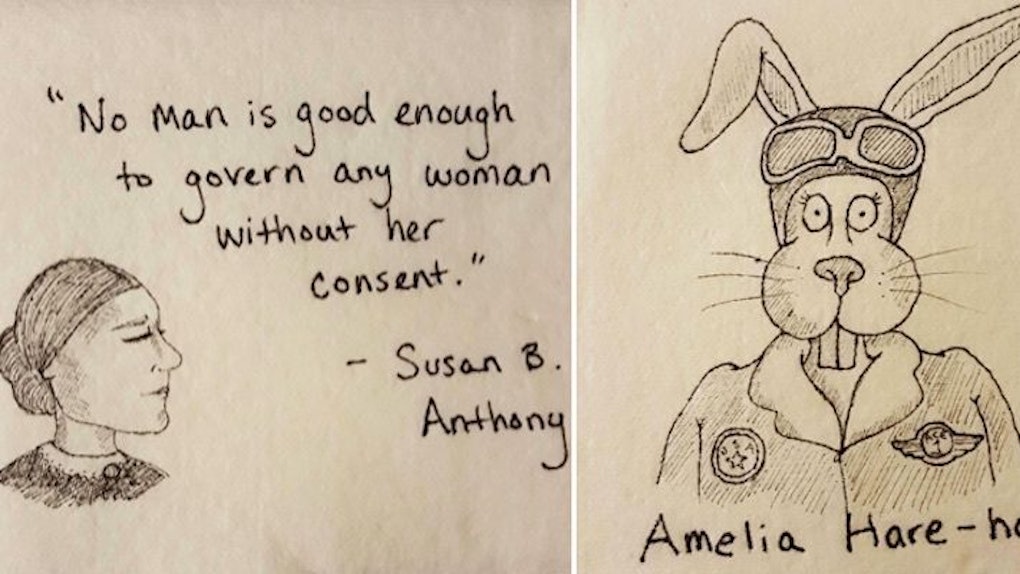 Mom Makes Lunch Napkins With Feminist Quotes On Them

Not too long ago we introduced you to Brent Almond.

You know, that awesome dad who leaves illustrations in his son's lunchbox every day?

If you're like most kids, this dad's drawings probably put the scribbled scraps of paper your mom used to leave in the bottom of your brown bag to shame.

However, it turns out Almond isn't the only parent that sends his kids to school with some amazing lunch time messages.

This Rhode Island based mom packs inspiring feminist quotes in her daughter's lunch. She's basically the Girl Boss hero every little girl needs in their life.

Ever since Elderkin's daughter Holden started preschool, she's been tucking napkins into her lunchbox that double as hand drawn notes that embody female empowerment.

Now this mama is fighting misogyny one mid-day meal at a time.

Her incredible notes feature everything from empowering animal puns to cheesy mom jokes to the famous words of prominent women throughout history.

Plus, you'll be glad to know Elderkin snaps a photo of her notes before packing them into her daughter's lunch, and shares all her napkin messages on social media.

Elderkin got the idea for this fun lunchtime project from her mother, who also used to leave napkin drawings in her lunch box when she was a child.

However, Elderkin decided to put a positive spin on this sweet tradition by using her notes to teach her daughter about feminism during Donald Trump's presidential election campaign.

I was having a really hard time coming up with anything positive or cheerful to draw on my daughter's napkins after the election results last week. I had brought both of my daughters to the polling place with me to vote, and I had been talking to my oldest daughter about the historical significance of electing the first female president. After the election results came in, all I could think of was that we had let her down. So I wanted to do something to remind my daughter (and myself I think) that women are amazing and capable and brave, even though it may not always feel like we are.

Elderkin started making napkins that include little lessons from all sorts of incredible women that range from Susan B. Anthony and Amelia Earhart to Michelle Obama and Malala Yousafzai.

Her daughter Holden seems to be a pretty big fan of her mom's feminist messages and even trades the napkins with her classmates at school.

I think that regardless of the outcome of the election, it's important to remind our children, daughters and sons, that equal rights should not be a political issue, and that girls can do absolutely anything.

Although the election is over, Elderkin will continue making motivating lunch napkins for Holden.

Plus, she also plans on drawing a second set of empowering napkins when her other daughter Elsa goes off to preschool this year.

If you ask me, this is one mother who definitely deserves a gold for her amazing work!