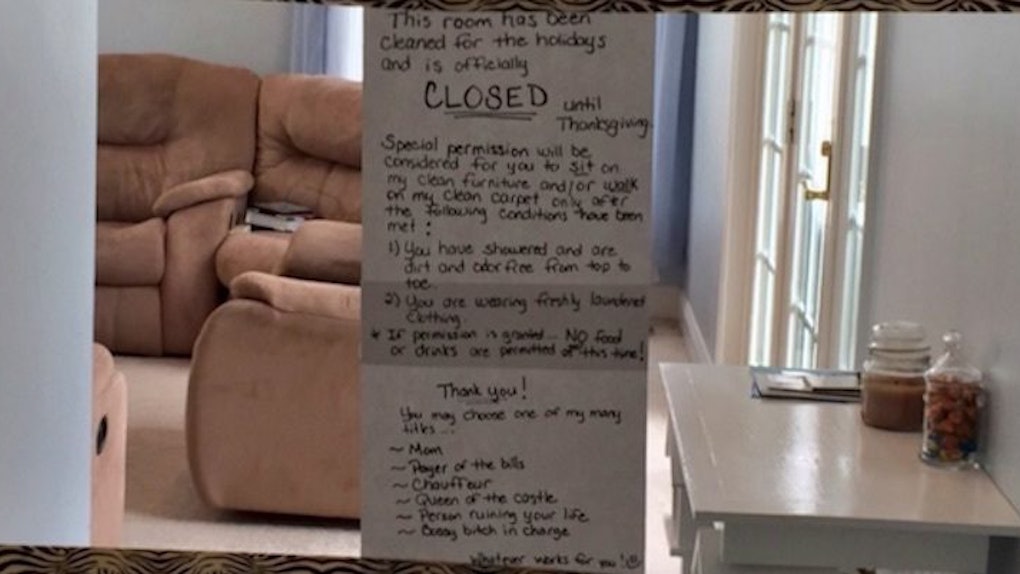 Thanksgiving is still a few weeks away, and 17-year-old Nick Denbow won't be allowed to step foot into his living room until the holiday arrives.

Based off a photo he shared on Twitter, his sassy mother cleaned the room from top to bottom and refuses to let her son mess it up before November 24.

To ensure Nick wouldn't disobey her new rule, she hung a hilarious sign in the doorway of the living room that says it's "CLOSED until Thanksgiving."

Understandably, Nick became upset over the sign and took his frustration to Twitter where he posted a photo of the note.

The cheeky sign has already gotten over 31,000 likes and 13,000 retweets. I guess people admire his mother's sarcasm and authority — I know I sure do.

In neat handwriting, the note says,

This room has been cleaned for the holidays and is officially CLOSED until Thanksgiving.

Of course, there are a few exceptions. She continues to list them, and writes,

Special permission will be considered for you to sit on my clean furniture and/or walk on my clean carpet only after the following conditions have been met: 1) You have showered and are dirt and odor free from top to bottom, and, 2) You are wearing freshly laundered clothing.

His mother concludes the note by listing titles her son can address her by, like "Payer of the bills," "Queen of the castle" and "Bossy bitch in charge."

Damn, she is DEFINITELY in charge.

How messy can Nick possibly get?! I'm a little afraid to see what his past damage on the room was like.

I mean, he looks pretty harmless, to me.

The teenager recently spoke with BuzzFeed News about the true reasoning behind his mother's note and said his mom, Michele Keylor, is sick of cleaning up after him and his brother.

Either way, she's a hero to all moms who try their hardest to keep their homes clean for the holidays. Kudos, Michele!