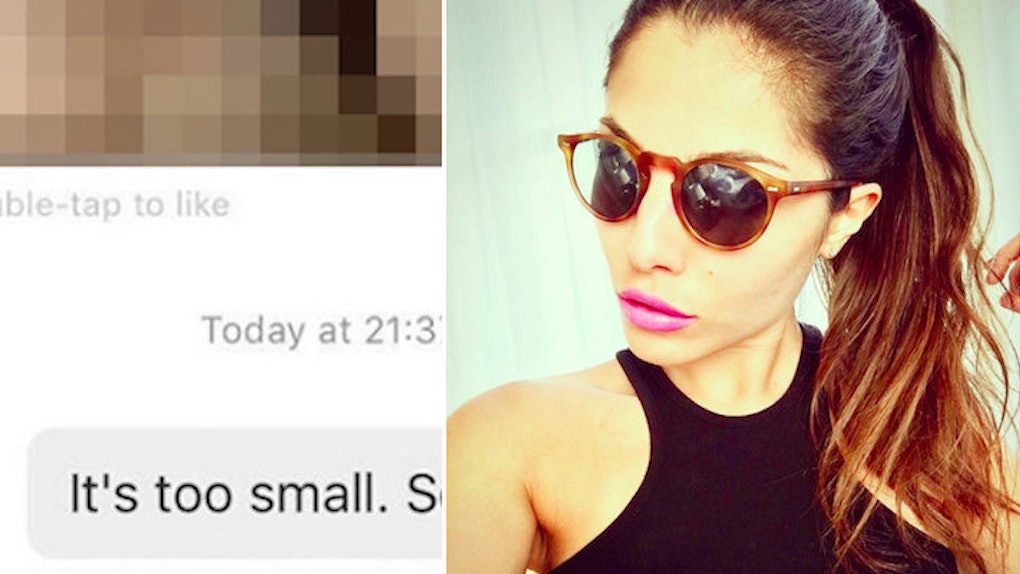 Listen, there are a lot of reasons I'm glad I'm not a model.

One is because a lot of people would be very confused as to why this average-looking woman was a model, and I don't like confusing people.

Another is because I do not want to deal with the harassment from gross dudes that models get every day.

Stina Sanders, London-based model, knows all about this harassment, and she's dealing with it in the best possible way.

Basically what happened was some random dude thought it'd be cool to send Stina a picture of his penis.

I sincerely hope every guy reading this article knows this already, but I'll say it anyway for the people in the back: DON'T SEND A WOMAN A PICTURE OF YOUR PENIS UNLESS SHE EXPLICITLY ASKS FOR IT!

Literally, has this method ever worked for any of you? Why do you continue to do this?

Anyway, Stina decided she had gotten one too many dick pics, and so it was time to publicly call these dudes out on her Instagram.

Note, this is the blurred-out version of the dick pic. If you weirdos wanna see the uncensored pic, check Stina's original Instagram.

Stina wrote in the caption,

Another day! Another d**k image! Men this is not ok!!!! I'm talking about the harassment and not the dodgy shaving skills please stop sending these types of messages.

In addition to the Instagram post, Stina also wrote a blog post titled "I don't want to see your penis!," which I think makes things pretty clear.

At least three times a week, I receive an unwanted dick pic.

She also explained she and her friends specifically created their own dating app called Huggle to avoid dick pics and other types of harassment women get from men online.

I for one, do not ever want to see your fleshy flute, no matter what size it is.

Subscribe to Elite Daily's official newsletter, The Edge, for more stories you don't want to miss.

Citations: Model Blasts Dudes 'Dick Pic' To Her 130k Followers To Send A Message To The Creeps (Dude Comedy)