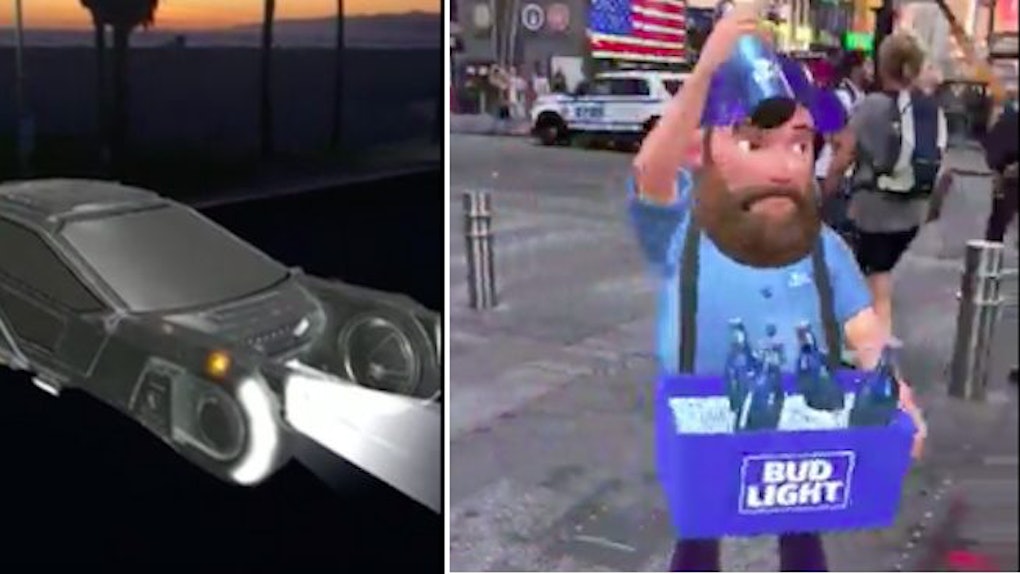 Snapchat ruled the summer of 2017 when the app introduced the the dancing hot dog lens. You couldn't scroll through someone's Snap story without seeing that little guy somewhere, but you kinda didn't want to, either. That animated dancing 3-D ballpark staple brought a lot of laughs, and people couldn't get enough of it. Snapchat noticed this too, so the company is now providing information about how to get 3-D ads on Snapchat.

According to Adweek, Snapchat is looking to piggy-back off of the success of the 3-D Augmented Reality (AR) lens and offer companies the opportunity to advertise on the app using this new technology. The benefit of the 3-D lens is that the AR component allows the user to move around with whatever graphic is on the screen -- it's not just taking a quick selfie of yourself with dog ears. Users can integrate the graphic into videos as they move around with their phone.

Snapchat already offers sponsored lenses, but now companies will be able to reach the audience in a new way with the 3-D graphics. How will this new ad experience help companies? Well, it's interactive, so users of the app will be playing with these 3-D graphics, taking video to add to Snap stories. According to Adweek, there is also data provided by the Nielsen company that, "the average sponsored lens increases ad awareness by 19.7 points and lifts brand awareness by 6.4 points."

Basically, companies will be able to get their product out in front of a broader audience that they might not otherwise have been able to without Snapchat. I don't know about you, but I like to make at least one visit to the app a day to throw on the "pretty" lens (you know the one), and then I get sucked in by whatever new ones have been added. Given how often people use the app, it's no surprise that, according to Adweek, there are 3 billion Snaps taken per day in the app -- no wonder you're always running out of storage on your phone. If that sounds like a lot, get ready to be shook, because when it comes to the cute puppy lens, Adweek went on to say that, "Snapchatters have spent the equivalent of 7,000 years playing with the lens."

With those kind of numbers, companies could really get their product some great visibility with the 3-D capability. Two companies are already on board with testing out this newfangled advertising method. According to Adweek, Bud Light has created a 3-D beer vendor who passes out the brews -- the character is complete with that distinct sing-songy yell that will immediately make you feel like you're sitting in the stands watching your favorite team play.

According to TechCrunch, the other lens is from Warner Bros.' Blade Runner 2049. You can put yourself in the film when you use the lens that reveals the film's "Spinner" car, and with all the twist and turns it takes, you'll be glad you're feet are actually planted on the ground. That's what makes AR great -- you get all the fun of flying around without any of the nausea.

How will the ads show up next time you use Snapchat? According to Adweek, "Advertisers can promote a product in the vertical-oriented ads and then deep-link to the 3-D World Lens that automatically opens the rear-facing camera where consumers can interact with the graphic." So, if you like what you see in an ad, you can play around with whatever 3-D graphic they're offering.

Don't worry about your Snapchat experience becoming bogged down by long videos, though, because according to Adweek, Snapchat is advising companies to get their point across within the first four seconds of an ad -- more time for you to play with the 3-D graphics.

If this isn't proof the future is officially here, then I don't know what is.