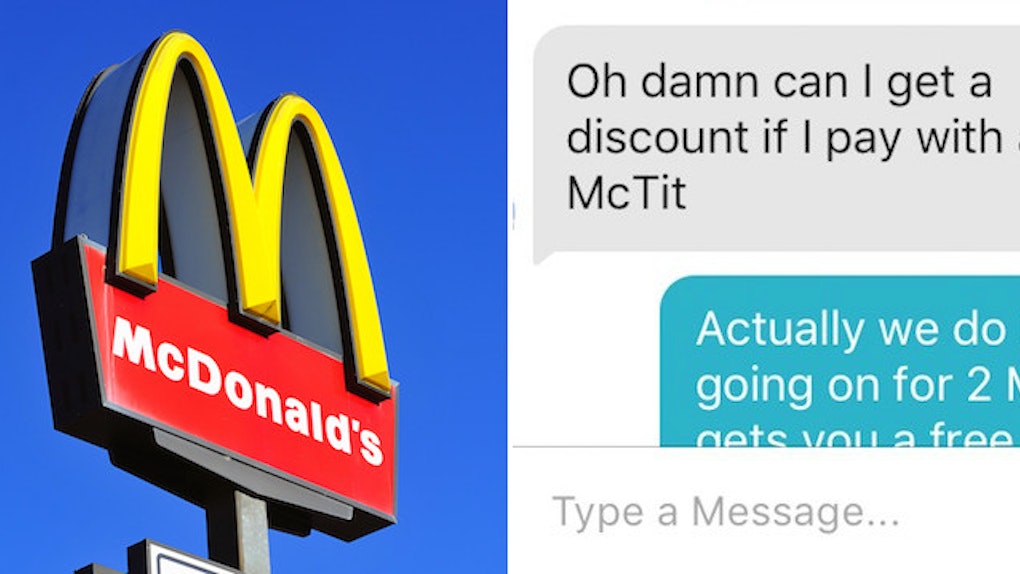 Tinder can be a very strange place depending on whom you come across.

While certain users may seem normal and completely sane before you meet them, you'll sometimes get stuck with a complete whack job in the end.

Other times, you may stumble upon a total weirdo who ends up being pretty awesome after a few dates, but only very few of us know what that's like.

When one guy took to Tinder in search of true love, he met a creepy chick named Ashley.

Ashley discovered this guy worked at McDonald's. His job information, which was apparently the key to her heart, was in his bio.

So, what did creepy Ashley do? Well, she didn't ask for a free Big Mac or a lifetime supply of McFlurries.

Instead, she made things super awkward by hurling a barrage of sexual McDonald's-related puns at the poor guy.

A Tinder user shared a conversation between himself and a creepy girl named Ashley who loves McDonald's a little too much.

Yeah, she really did say "McDick." But wait, there's more.

Now, if you're a guy and you've ever used Tinder, you know women are typically the ones being creeped out by all of the gross douchebag bros out there.

Clearly, that was NOT the case this time around! Thanks to the world-famous golden arches, this dude's Tinder experience will never be the same.

Of course, the internet has been quick to question whether or not Ashley was real. I mean, sure people love McDonald's, but it's a bit unrealistic to think any sane person would be as direct as she was.

One user suggested the guy block out her name and photo next time because "a girl this playful doesn't deserve to be outed like this."

OK, so a few people are buying Ashley "McDick's" realness. To the rest of the non-believers...

Imgur user Motobmurray originally shared the conversation on the photo-sharing platform and told the haters to "think what you want to think."

Now, excuse me while I purposely avoid eating McDonald's thanks to these disturbing mental images. Thanks, Tinder!

Citations: My Tinder bio shows I work at McDonalds, why can't Tinder always be this easy? (Imgur)