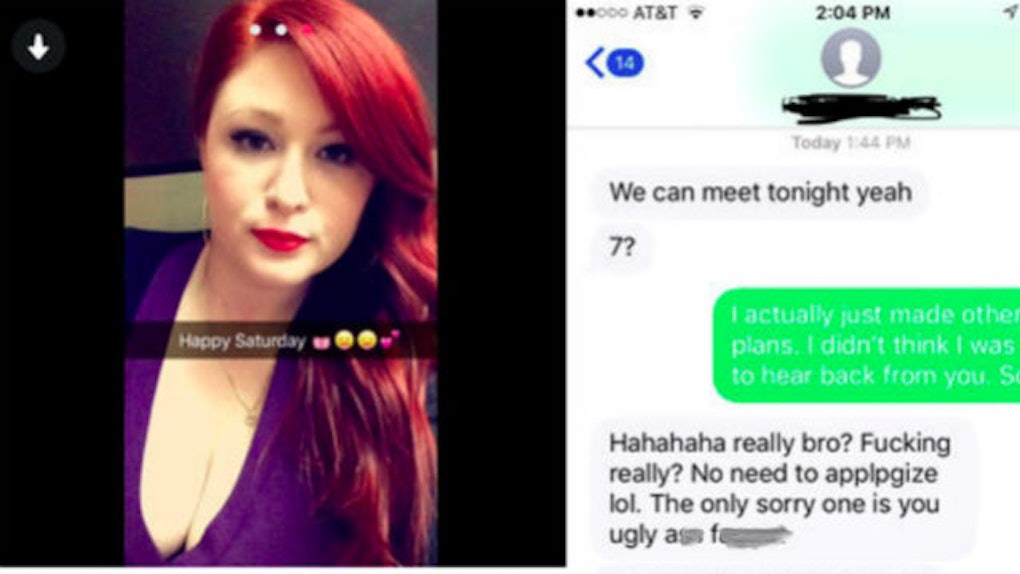 After Tinder Date Is Turned Down, Girl Loses It On Guy

While it's hard to believe, I too have used Tinder.

I know, I know. You're probably thinking, "Hope, you are so beautiful, smart and funny. How is it possible you have difficulty finding someone to take your dowry in this modern age?"

Love is a fickle thing, my dear, dear casual acquaintances.

I have my fair share of Tinder-date horror stories (one stopped talking to me all together at a bar to hit on another girl. Another time, I woke up in a bathtub missing my kidney), but at least no girl has ever lost her ever-loving mind over my unavailability to grab a drink.

One guy had a rather uncomfortable experience with his match.

Already, I can sense the red flags. There's something in her eyes that suggest, "Oh, dis bitch cray..."

The 3-mile distance may be too close for comfort.

Things went sour pretty fast after he informed her he was unable to meet up.

In case you can't read the kind, yet blurry response, it says:

I actually just made other plans. I didn't think I was going to hear back from you. Sorry.

This is totally normal -- if you don't hear back from a Tinder date, then you're free to make other plans. You shouldn't be waiting around, hoping they'll get back to you.

He's not even saying, "Let's never meet up!" He's just saying he already has plans for that night!

She did not take it well, however, and proceeded to tear our nameless friend a new one.

The woman calls him a number of names, mostly focusing on "bitch" and "ugly ass."

She even insults him by calling him a "ginger midget," which is ironic, because she also has red hair.

He probably blocked her number, so she then reached out one final time on a new number, to remind him that he'd be lucky to have her...

This 29-year-old woman's response basically reeks of low self-esteem, which she is trying desperately to cover with an inflated ego.