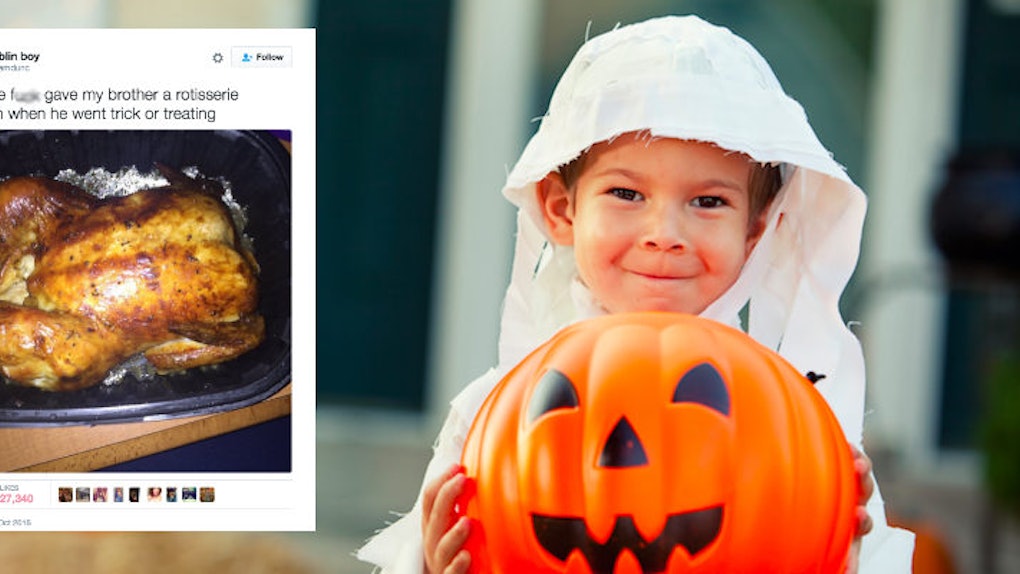 Man Gave Out Chickens On Halloween, Twitter Gets Hungry

Growing up, I was obsessed with how much candy I could rake in on Halloween. I tried to fill my pillow case's coffer until it reached the same levels of loot as Scrooge McDuck's vault.

If I had received a rotisserie chicken instead, I'd be pretty bummed out.

Also, my parents were extremely paranoid about the prospect of me eating a razor blade hidden in my trick-or-treat goodies, so they probably would've cried foul and thrown the whole fowl out.

Now, if I received -- as an adult -- a rotisserie chicken on Halloween, like the ones distributed by Twitter user @boner_tricks, I would thank my lucky stars.

I'd be able to eat this for days.

However, one Twitter user was pretty pissed off his brother received an entire chicken instead of a handful of candy.

Uh, don't you know that sometimes chicken is more precious than gold?

However, Twitter predominantly had one reaction to this Robin Hood of poultry: hot, steaming jealousy.

Lair wouldn't even be angry. You know what Lair would be? Full. Full of chicken, to be precise.

Whoever is in charge of the laws and bylaws of Halloween's customs take notes. We're swapping candy with lean protein.

Giving a person a chicken on Halloween is the emotional equivalent of proposing to your girlfriend while flying a plane.

Ooh, someone is extremely jealous. Sorry, but *Attempts Soup Nazi impression* "no chicken for you!"

I'm sorry, but this sounds kind of sexual?

When you wish upon a chicken, makes no difference if it's finger-lickin'... Never mind, I just got sued by Disney for writing that.

Uh-oh, someone just brought out the ALL CAPS, SO SHE WANTS THE WHOLE CHICKEN AND NOTHING BUT THE CHICKEN, SO HELP HER, GOD.

Wait, who has just corn for a meal?