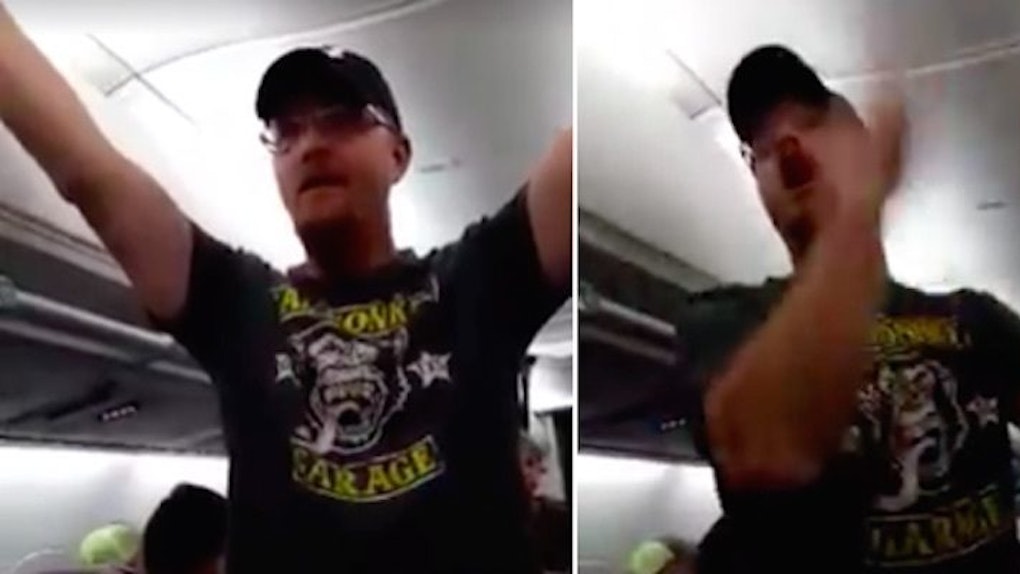 Emma Baum was recently on a Delta flight traveling from Atlanta, Georgia to Allentown, Pennsylvania. But little did she know her flight would also come with some free in-flight entertainment.

Nope, this show wasn't a complimentary viewing of the latest movie release. Instead, it was a Trump supporter shouting about "Hillary bitches" to everyone on the plane.

Baum captured the man's political rant in a video. In it, you can see him yelling "Donald Trump, baby!"

He then points to a passenger and says, "That's right, this man knows what's up" before he finally announces, "We got some Hillary bitches on here!"

His rant didn't end there, either. He continued disturbing passengers with his rant, yelling things like "Donald Trump! He's your president, every goddamn one of you!" and "If you don't like it, too bad!"

Baum allegedly told Daily Mail the man was removed from the flight for "at least 15 minutes" before he came back and returned to his seat.

Apparently, Delta has been receiving a lot of criticism for their choice to let the unruly white male back on the plane.

This is especially because this incident came shortly after two Muslim women were removed from a flight simply because they made one of the passengers feel "uncomfortable."

Now, Delta is trying to do some damage control.

According to Buzzfeed, a spokesperson from Delta made a statement about the incident:

We are sorry this disruption occurred. Our crews work hard to ensure flying is comfortable for all of our customers. We are currently investigating the incident. We've followed up with the teams involved and all agree that this customer shouldn't have been allowed to continue on the flight. Our responsibility for making sure all customers feel safe and comfortable with Delta includes requiring civil behavior from everyone. The behavior we see in this video doesn't square with our training or culture, and follow-ups will continue so we can better ensure employees know they will be fully supported to make the right decisions when these issues arise.

Since then, Ed Bastian – the Chief Executive Officer of Delta – has also sent a memo to the airline's employees. He basically said that after he reviewed the incident, he has determined this disruptive pro-Trump passenger will "never again be allowed on a Delta plane."

In the memo, Bastian wrote,

Part of being a reliable travel partner and a servant leader is acknowledging our mistakes so we can learn from them and respond more effectively in the future. Delta has apologized to the customers onboard that flight. We are also refunding those customers the cost of their tickets.

So, if you have some strong political opinions, it's probably best to save your obnoxious rant for when you get OFF your plane.