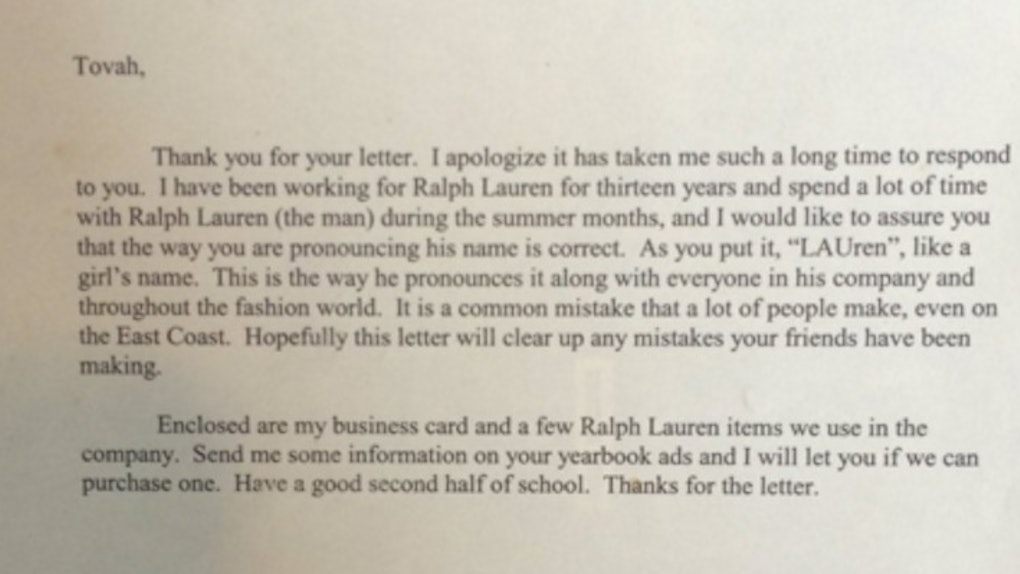 You know what; just when you thought you understood this crazy, messed up world we all live in, the universe throws you a giant curveball.

This is one of those moments. You can thank Tovah Silbermann for having to re-adjust your grip on reality.

The comedy booking agent dug up an old letter from fashion company Ralph Lauren that proves most of us have been pronouncing the founder's name all wrong.

It turns out the name is pronounced "LAU-ren," like the common girl's name, not "Lau-REN" with emphasis on the "ren."

I know, I'm going to have to lie down too.

The life-changing part of this letter, written to Silbermann by a friend of Ralph Lauren himself, reads,

I have been working for Ralph Lauren for 13 years and spend a lot of time with Ralph Lauren (the man) during the summer months, and I would like to assure you that the way you are pronouncing his name is correct. As you put it, "LAUren," like a girl's name. This is the way he pronounces it along with everyone in his company and throughout the fashion world. It is a common mistake that a lot of people make, even on the East Coast. Hopefully this letter will clear up any mistakes your friends have been making.

Well I'll be. The proof is there in cold, black and white print, and I don't want to believe it.

*Burns every Polo shirt ever bought in high school*