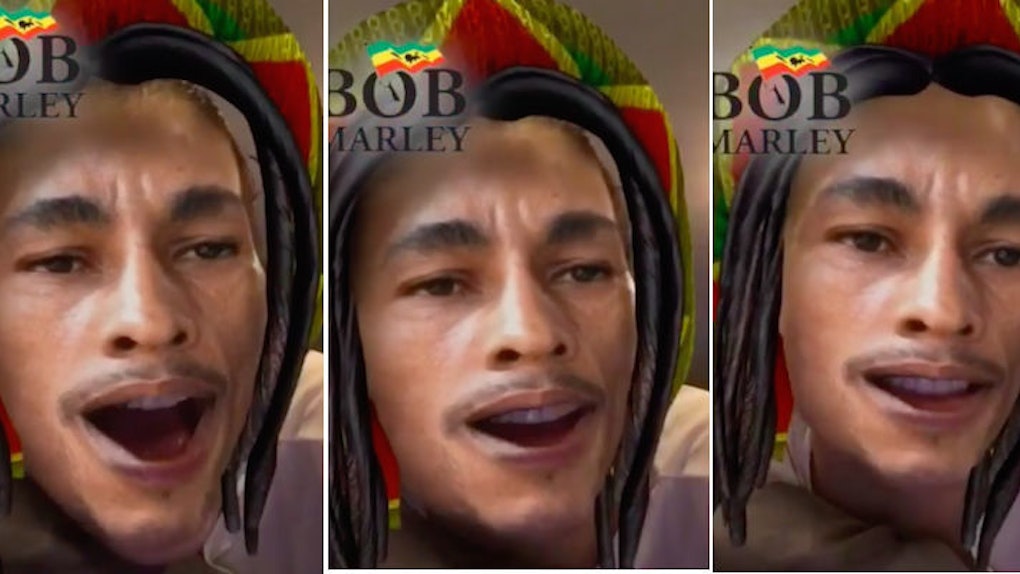 Users are trying to make sense of Snapchat's logic behind introducing a Bob Marley filter that masks users' faces with Marley's and surrounds their heads with halos of cartoon dreads and colorful tam fabric.

Many consider the filter a hyper-modern form of blackface and are equally disappointed over its use as a 420 commemoration. The filter appears to use Marley's image only because of his well-known marijuana use, rather than in reference to his legendary musical contributions.

Twitter lit up this morning with users calling out Snapchat's decision.

Thank you snapchat for associating Bob Marley with weed and weed only. Light black face on 4/20 — Pumpernickel (@DiscoveryKiid) April 20, 2016

There were users, though, who didn't share the same sense of outrage.

Kylie Jenner ranked among them.

In response to her Snaps, some folks were like, “Hmm. Ky, IDK, girl.”

Snapchat released a statement, WIRED reports, in which it cites Marley's music as the key inspiration for the filter.

The lens we launched today was created in partnership with the Bob Marley Estate, and gives people a new way to share their appreciation for Bob Marley and his music. Millions of Snapchatters have enjoyed Bob Marley's music, and we respect his life and achievements.

If you didn't have an opinion on the alleged scandal before reading this statement, perhaps you'll join me in flipping some hair, turning on our heels and telling Snapchat we're not idiots.

We have calendars, Snapchat. We know what day it is. It isn't the international holiday for reggae appreciation.

It's 420. You made a 420 filter of a late, beloved Jamaican songwriter and performer -- albeit with the permission of his estate -- whose penchant for marijuana was well-known but secondary to his musical accomplishments.

You rolled out this filter and, just one day ago, probably thought it was the cleverest idea in the whole wide world, so own it. It's yours now, for better or worse.

Citations: Snapchat, and Kylie Jenner, in hot water over 'blackface' filter (The Guardian)