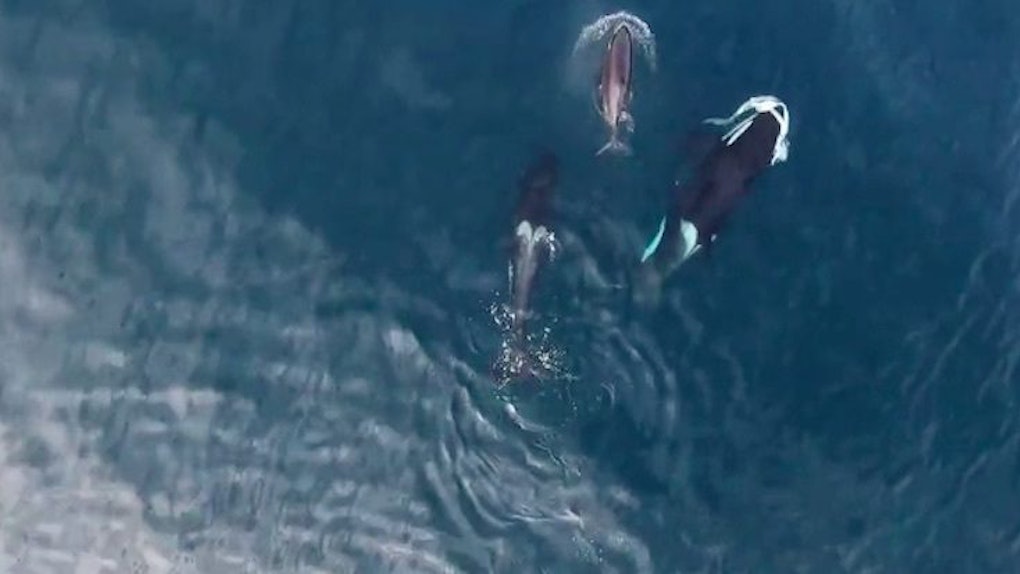 When a group of whale-watchers set out with Monterey Bay Whale Watch last Tuesday, they had no idea they would end up seeing a very rare sight: offshore killer whales eating a shark alive.

Shortly after they set out, the group received a call from a fishing boat alerting them to the presence of some killer whales (or orcas) in the area.

They set out in the direction of the killer whales, and were stunned by what they encountered.

Slater Moore, a photographer who works with the whale-watching company, told The Washington Post,

It was a little overcast, but [the water was] flat calm. It couldn't have been any better to see killer whales.

When they happened upon the killer whales, Moore was recording with a drone. He explained,

I was actually about to bring my drone in when we saw a bubble blast, a bunch of bubbles coming up to the surface. The next thing you know a killer whale comes up with a shark in its mouth.

Behold, the awesome power of nature!

The group of killer whales were apparently passing the shark between one another, having a bit of a group meal.

As Moore put it,

They kind of take turns. One grabs the shark. The other ones peel off and circle around... We were kind of just super excited, everybody standing up.

It's pretty phenomenal footage... I don't think anybody's gotten any drone footage of it. If you're in a boat, you're only seeing a part of the whales, so I think the drone footage is really great for that behavior.

If you're feeling bad for the shark, just remember this is all part of the circle of life.

It's also a reminder killer whales, which are actually not whales but a species of dolphin, are the most dominant predator in the ocean.

They are apex predators. In other words, they have no natural predators.

It's important to note killer whales are not as sinister as their name sounds. They don't typically attack humans.

But it's still probably best to let them do their thing and admire them from afar!