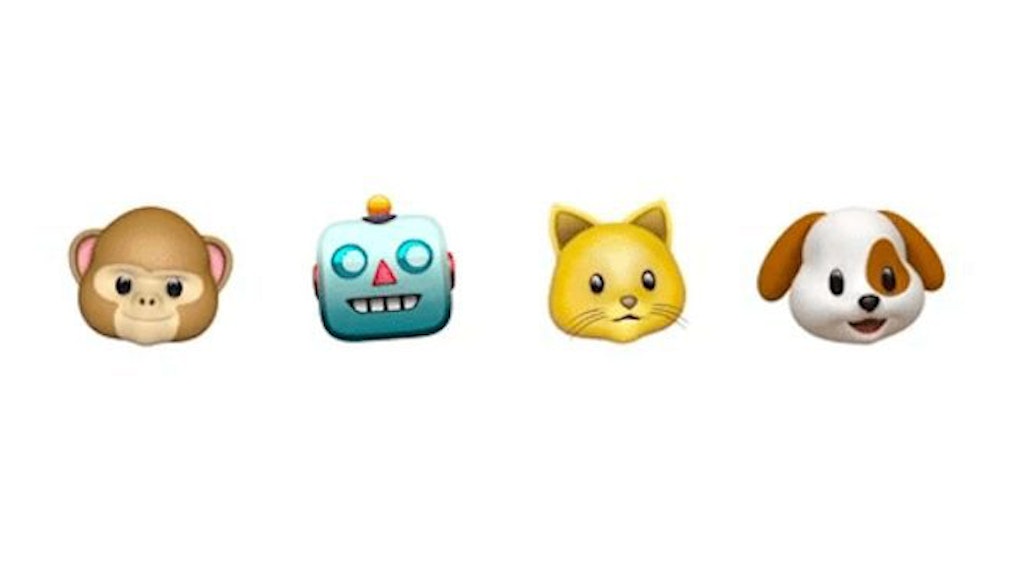 iPhone 8 "Animojis" Are Coming With Update, According To This Firmware Leak

As you wait for the highly anticipated Apple event on Sept. 12, you can indulge in some iPhone 8 rumors to hold you over -- since you won't be able to get any Apple-verified information until Tuesday. The newest leaks will definitely upgrade all of your iMessages. Say goodbye to static emojis, because the latest rumor says animated emojis are coming on the iPhone 8, and they will supposedly be included in the iOS 11 update.

According to The Verge, the most recent HomePod firmware leak reportedly reveals a final build of the iOS 11 update. Of course, more iPhone 8 rumors come along with that. There is a lot of information to unpack, so why not start with the most adorable update? You'll probably be obsessed with the cute Animojis as soon as they're available.

What exactly is an animated emoji, anyway? For starters, they're calling it an "Animoji," and it's an emoji that moves (so it is aptly named). That's not all, though, because the way that it moves will require help from you. According to the leak, Apple will supposedly use face-scanning hardware to create 3D iterations of popular emojis using your face and voice. Apparently, Apple is describing Animoji as, "custom animated messages that use your voice and reflect your facial expressions." If the rumors are true, it looks like Apple will be brining this capability to a wide-range of emojis (yay!).

Here is what might be popping up on your iPhone 8.

You guys, some people were really shook by this news -- the future is here.

If you've ever felt that the unicorn emoji could be a bit more majestic with just the right mane flip, then you'll be able to upgrade it by adding your own touch and making all your messages a little more magical. You might have to cut into some of your Snapchat selfie time to get down to business and customize all of your favorite Emojis into your new favorite Animojis, but it'll be worth it to have the best iMessages in the game.

A 3D puppy is an appropriate reply to any text.

If you'd rather keep your face out of it, you can look forward to the rumored new Emojis in the iOS 11 update. According to Emojipedia, some of the new Emojis will include a zebra, a T-Rex, a zombie guy and a zombie girl (just in time for Halloween), and a genie, like the one from Aladdin.

The next leaked update also utilizes the face-scanning hardware that's rumored to be coming with the new iPhone 8. Instead of the boring old fingerprint touch recognition, you'll be able to unlock your phone using your face. A leaked animation of the rumored update appears to indicate that you will move your face around the front-facing camera in order for it to scan, and then when your face is recognized by the hardware, your phone will unlock. This sounds like a wonderful plot for a twin movie; maybe Mary Kate and Ashley will do a modern-day It Takes Two reboot. Fingers crossed.

OK, back to the updates.

Since it seems that Apple will stick with no headphone jack on the iPhone 8, there has been a slight update to the AirPods -- more specifically, how you can charge them. Apparently, the charging indicator will be moved to outside of the case in order for you to easily check on the battery status without opening the case. The appearance of the AirPods is pretty much the same, but hey, it'll be easier for you make sure you're all charged up to rock out and dissect every lyric when Taylor releases her next single.

So, as you keep waiting for the big reveal on Sept. 12, browse your way through these Animojis and get ready to strike a pose.