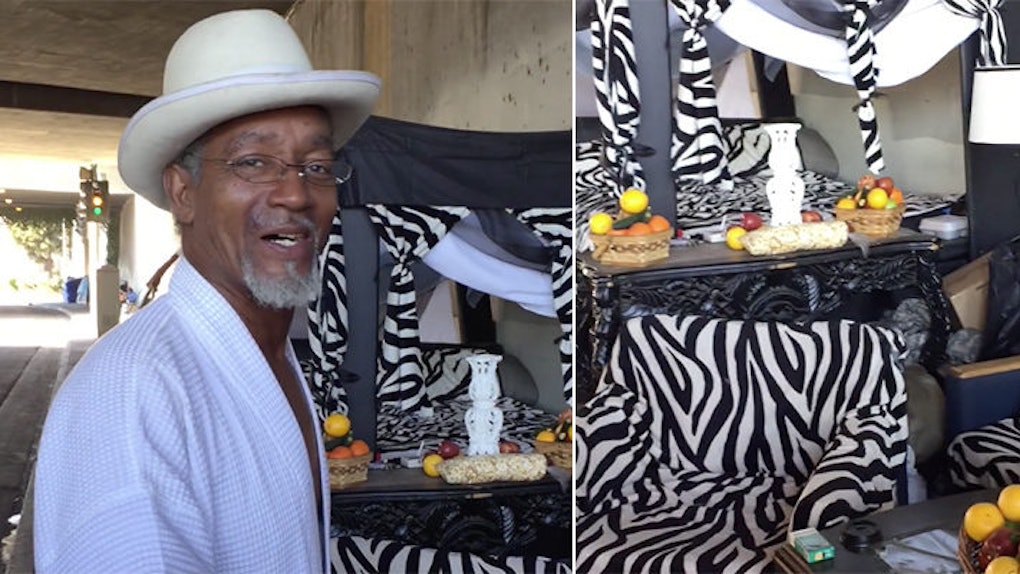 Do you have a jacuzzi? I know I don't.

And yet, somehow, this homeless man has managed to add two of 'em to his extravagant makeshift home under a Los Angeles freeway.

OK, OK. We won't get carried away.

Those "jacuzzis" are, by Ceola Waddell's own admission, not exactly top of the line. Waddell did tell Facebook user Cynthia Mumba Farr, after all,

All it is is a refrigerator on its bottom... being innovative.

But that's exactly what Waddell is all about: innovation.

And now, thanks to Farr, who posted a video of Waddell giving her a tour of his home, over 1 million viewers know it.

The popularity of the video prompted the LA Times to pay Waddell a visit, and what the paper found was a story that was as extraordinary as it looked on Facebook.

According to the Times, Waddell is a 59-year-old who first became homeless as a teen in Memphis. After working multiple jobs and side-hustles after arriving in Cali, the former singer lived with his girlfriend for a decade.

Her death led to his eventual return to homelessness.

The emphasis, though, is on "home" because that's exactly what Waddell has managed to create under trying circumstances.

He counts a shoe rack, guest room, two toilets, a living room, a smoke room, a snack bar, a man cave and, of course, the jacuzzis among the amenities at his humble abode.

He's put all this together, mind you, despite the city's Bureau of Sanitation taking away some of his home's features on two separate occasions, the LA Times reports.

He told the outlet,

I refuse to let the city beat me down to what they think a homeless person's profile is, living on cardboard. This should be a landmark.

That refusal has paid off, literally. Waddell says he rents out his guest room at a rate for $25 per week (and $10 per night, for those interested in a shorter stay).

It's a truly fascinating story. That is, for everyone but Waddell himself.

He told the LA Times,

I still don't get it, what's so fascinating about this place. I decided I wanted to live like everybody else, make me something nice that I wanted to come home to. If I was in the Arctic I'd make me an igloo.

We believe you, bro.

Citations: Standoff beneath the 110 Freeway: Homeless man builds a compound, officials tear it down, he rebuilds (LA Times)