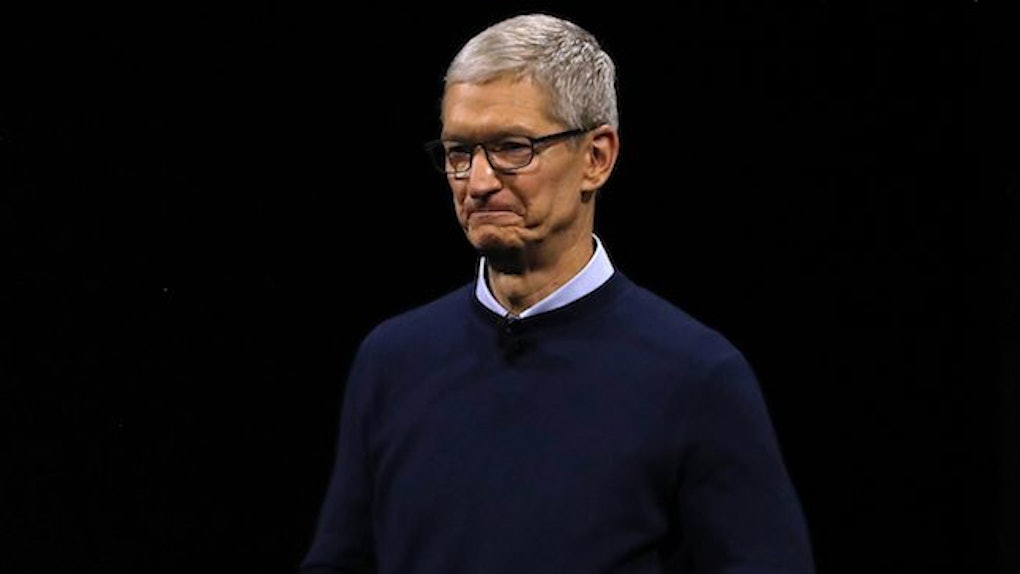 Apple's chief executive officer, Tim Cook, called iPhone 8 "a huge step forward for the iPhone," at the Sept. 12 keynote address, made earlier today. You may be wondering how a tech brand, which has basically taken over the world and made itself an absolute necessity for Millennium survival, can take any more steps forward. But, like anything else, if you're not moving forward, you're staying still, and in the tech world, staying still only spells out one thing: failure. If you want to move forward too, you're probably wondering where you can buy iPhone 8 once it's released on Sept. 22. But getting your hands on the latest Apple invention might be harder than you think.

First of all, you can start pre-ordering the iPhone 8 on Sept. 15, thank GOD. There's definitely nothing I'd rather do than mark my calendar for that exact date and shell out what more than most Americans make in a week to be able to say, "Hey guys, I got the new iPhone 8!" to a room full of people pretending to be friends with me. I guess now would be a good time to mention the price, eh? The new iPhone 8 32GB phone will cost $699, and up to $899 for a 265GB model.

Pre-ordering will be available on Apple.com, and of course, according to CNet.com, Apple allows you to link your purchase through your phone carrier (AT&T, T-Mobile, etc.), so you're fully connected to "the man." OK, I'll stop outing myself as an anarchist and get into some of the cool features that I guess make this phone worth the price.

Is The iPhone 8 Worth It?

So now that we've established that you can get the iPhone 8 through Apple.com and your cell phone provider starting Sept. 15, and the official phone comes out Sept. 22, it's definitely worth pointing out some of the reasons an iPhone 8 may or may not be worth the money.

According to the New York Times, the iPhone 8 will have a "six-core processor" which will make game playing and streaming faster and more accessible than ever before. The dual cameras on the phone also feature an upgrade, claiming to make your front-camera selfies more perfect than ever before. So if you're standing near a window with the light coming in from behind you, the iPhone 8 is promising to fix that shadow cast on your face and make you look f*cking perfect from exactly where you are.

Hmmm, so the most exciting rumor I'd heard about the new iPhone release is the facial recognition technology, but that appears to be reserved for the iPhone X and not the 8, so what even is the point? Nevertheless, the New York Times is still calling the iPhone 8 one of the most important releases for Apple, saying, "Wall Street analysts have estimated that more than half of iPhone buyers will buy the 8 and 8 Plus over the next year."

Well I guess I should start saving now! Or, I could donate to Hurricane Harvey and Irma victims, because you know, some people literally do not have shelter or belongings while this Apple unveil takes place. Actually, I'll never be able to do either because I am a slave to my student loan debt and look forward to mindlessly paying into that for the next 20 years of my life -- or probably longer, since interest rates are totally not recognized as a real problem by our government.

Haters will say I'm jealous, and you're right: I wish I had enough money to pay off my student loan debt, donate to hurricane victims, AND buy the iPhone 8. But you can't have it all.