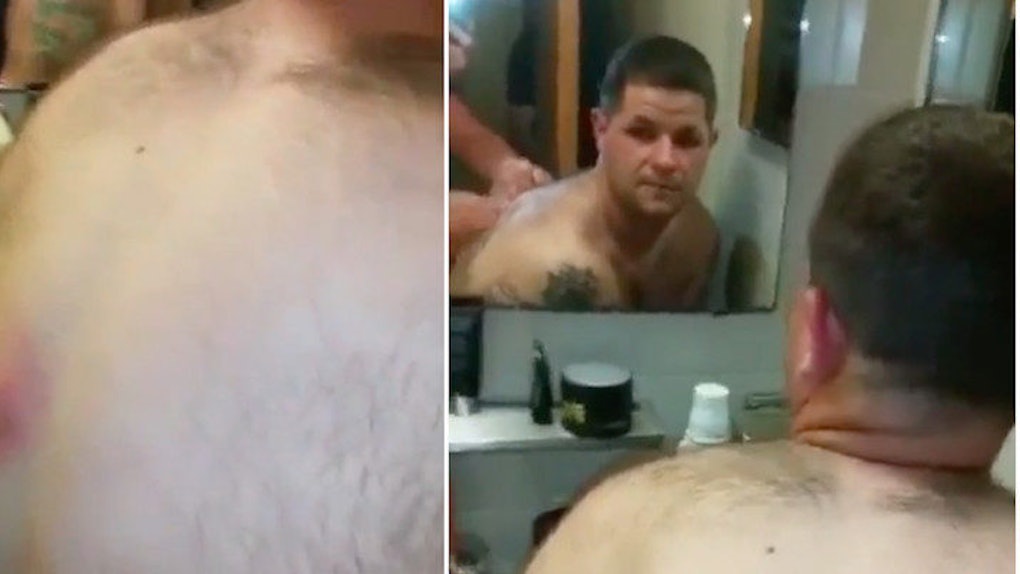 Here's a video worthy of that "yack" noise you make when you're trying to get your squeamish friend to vomit unannounced.

It's a guy having a huge pimple popped on his back, and you're either going to hate it (99.99 percent of the population) or love it — if you're into this sort of thing.

You know there's a name for people who like this stuff? Actually, after a brief Google search, I can't justify that statement. But there should be a name for those who can't get enough of pimple-popping.

The video shows a group of men standing around their friend.

He is topless, extremely hairy and — most importantly — ready.

On his back lies a mammoth pimple.

It's evil looking. Honestly, a splash of holy water may have been the better option here. THE POWER OF CHRIST COMPELS YOU.

One friend leans in for operation pop, while another records it on his phone.

But he ignored the golden rule of pimple popping: Always stand at least 35 feet away from the popper and poppee.

His flagrant disregard for the rules got the better of him when his mate's pimple erupted. A powerful stream of pus pierces the air faster than anything on this planet and sprays all over him and his phone.

The victim screams in terror and drops his cell.

It's a scream so real and horrifying it sounds like he's been blinded by the venomous dinosaur from "Jurassic Park." You know the one:

When the dust finally settles, you can hear him say,

We're out too, man. Game over. I pray that doesn't live long in the memory.