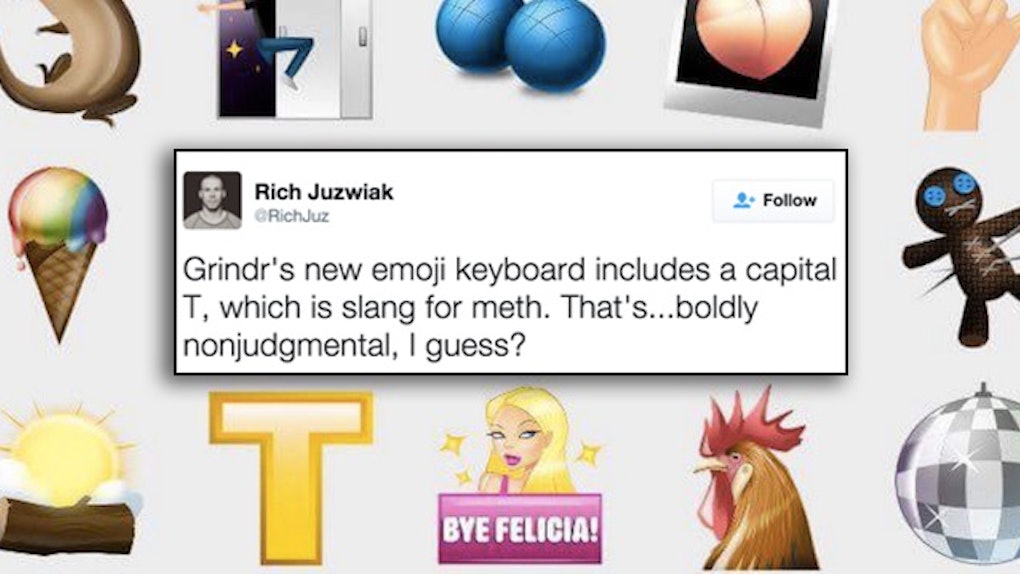 If you're on Grindr, you're well-aware a new set of emojis was released on the app this week.

The dating app's emoji selection is helping users flirt with fun emojis that aren't available on a normal Apple keyboard.

However, Grindr users noticed one tiny detail in the "gaymoji" selection that came as a shock to many.

The keyboard originally came with a large "T" emoji, and users were convinced it was a reference to crystal meth.

Apparently, users thought the "T" stood for "Tina," which is a popular slang term for crystal meth.

People quickly took to Twitter to voice their concerns that Grindr would reference such a drug in the "gaymoji" selection.

"What the actual fuck."

Some users are taking polls to prove their point.

It looks like Grindr noticed all of the commotion because the "T" emoji disappeared from the app's "gaymoji" keyboard on Tuesday afternoon.

Regardless of whether or not Grindr did make a crystal meth reference in the "gaymoji" selection, people are sure to enjoy the new set of stickers.

Joel Simkhai, the founder of Grindr, talked to the New York Times about why the app created such an extensive set of "gaymojis" for the users.

Partly, this project started because the current set of emojis set by some international board were limited and not evolving fast enough for us.

The new collection includes 500 icons (well, until the "T" was taken away).

The first set of icons is free, but if user wish to unlock the rest, they'll need to pay $3.99.