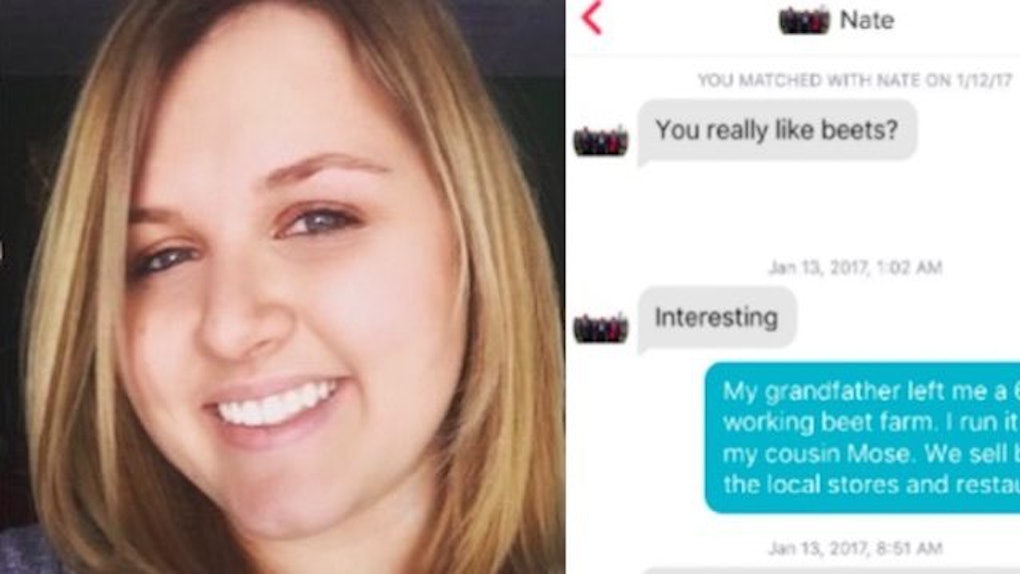 There are a variety of reasons why people use dating apps like Tinder.

Some people swipe through a sea of eligible singles in search of love — or a hookup buddy that lives less than a mile away from your apartment.

Others swipe left and right in search of some good laughs.

Caroline is a Kent State University freshman who hails from Cleveland, Ohio.

Last week, Caroline was putting her thumbs to good use by swiping through a bunch of Tinder profiles, when she was matched with one of her right-swipes.

Apparently, Caroline has just finished a pretty intense marathon of the television show, "The Office," so she decided to spice up her Tinder conversation with some lines from the show.

However, Caroline didn't just pick any old quotes from "The Office."

Instead, she decided to use a bunch of Dwight K. Schrute's hilarious lines about being a beet farmer.

That's right. Caroline somehow manages to convince this clueless guy that she's a beet farmer using only quotes from the weirdest character on "The Office."

If that's not enough to make you die of laughter, you'll be glad to know that in addition to buying her beet farmer story, this poor guy actually seems genuinely impressed by her farming profession.

After making this guy's heart skip a beet, Caroline decided to share her little Tinder prank with the world by posting a screen shot of her comical conversation on Twitter.

yesterday i convinced a boy that i am a beet farmer by using quotes from the office pic.twitter.com/3xzSEJGVfz — caroline (@caro_bearo) January 15, 2017

It didn't take long for this entertaining Tinder exchange to go viral, and since then, it's racked up thousands of like and comments.

A lot of people related to Caroline's sense of humor.

And commended the freshman for her pure ingenuity.

Because let's be real, this is basically the best thing that has ever happened to Tinder conversations.

Other people couldn't believe that this guy actually fell for her ridiculous beet farmer story from "The Office."

Most people think it's hilarious. The majority of the responses are definitely positive. A few people have said that it was mean of me to continue with the conversation when he was trying to be nice and make conversation, but it was all in good fun and no one's feelings were hurt.

Now, in case you're wondering, Caroline wasn't planning on stringing this guy along with her beet farmer story forever.

Once her post reached about 5,000 retweets, she messaged this gullible guy to let him know that she was a college student and not some sort of root vegetable cultivator.

Seriously, it's going to be hard for someone to come up with a practical joke that beets this epic Tinder prank.

Citations: This Girl Convinced A Boy On Tinder That She Was A Beet Farmer Using Quotes From "The Office" (Buzzfeed)