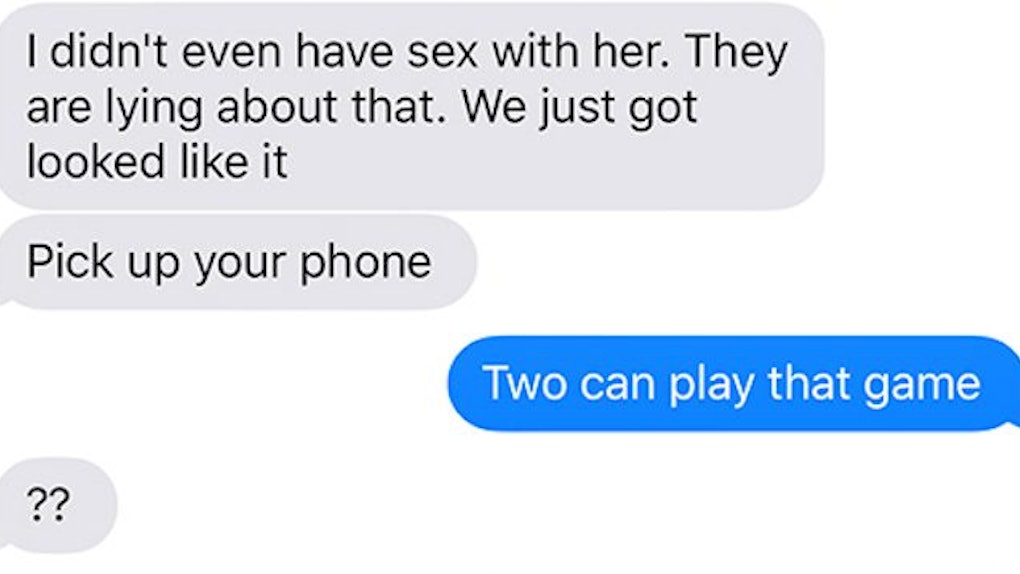 I've said it before, and I'll say it again: Cheating isn't cool.

If you do find yourself in bed with someone who isn't your boyfriend or girlfriend, you're usually faced with two options:

(This is the shitty option.)

2. Start writing an explanation as to why you hooked up with someone you shouldn't have.

An apology is appreciated, but not always accepted.

A guy on spring break with his girlfriend recently learned this hard way.

Apparently, he cheated while he was wasted and justified his drunken actions with a strand of text messages.

At first, he tried to reach "Jess," and relentlessly asked her to pick up her phone.

Since she was ignoring him, it's safe to assume she knew what happened.

Then, he admitted he cheated on her and wrote,

Jess, I obviously didn't mean anything I didn't even know what was going on. Chris loaded to third beer pong I took with JACK and that's the last thing I remember until waking up in my own liken — puke* I didn't even have sex with her. They are lying about that. We just got looked like it. Pick up your phone.

Instead of succumbing to his explanation, Jess replied with a savage text.

Two can play that game.

Moments later, she responded with a picture wearing nothing but a bra and a thong with her bare butt next to another guy's face.

Quite obviously, she didn't want to put up with her cheating boyfriend and moved on from him without delay.

Whether or not she witnessed him cheating or heard about it from a friend, she certainly had no remorse about saying goodbye.

I think it's safe to say their relationship is over.