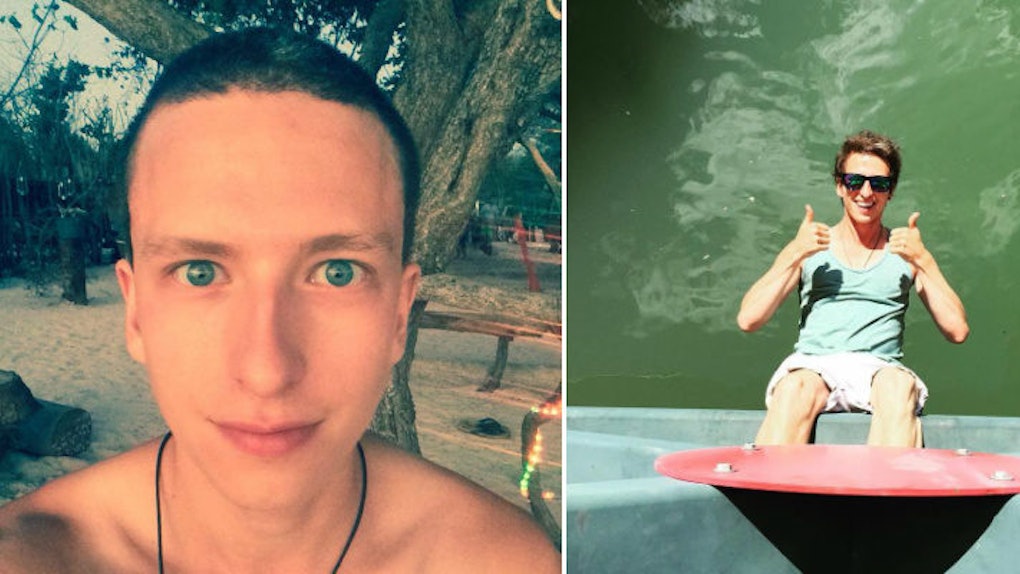 A Gay Man Was Violently Attacked Shortly After Trump's Win

The fact that Donald Trump was going to be our new president-elect was gut wrenching to witness Tuesday night.

Already filled with anxiety and stress, all my hypothetical questions about what would happen if this sexist, saggy man and his homophobic sidekick found their way into power became real concerns.

"What will happen to my LGBTQ community? What about my life will change for the worse? Will I still feel safe as a gay man in this country?"

I was able to watch the results from a local bar close to home and crawl into bed with a heavy heart. Chris Ball, a gay Canadian visiting California, wasn't as lucky.

Ball chose to watch the election at a bar in Santa Monica, where the vibe took a turn for the worst, reports Metro News.

As Hillary's slight lead began to slip away, rowdy supporters of the Republican nominee showed their true colors. According to Ball, some of his fellow patrons started yelling vicious, homophobic slurs — directed straight at him.

"They were hurling homophobic slurs and allegedly saying things like: 'We got a new president you fucking faggots,'" Ball said. "I mean, I kind of got into it, but I didn't want to provoke them."

Later, when Ball decided to leave the bar for a gloomy and overtly depressing walk home, he was bashed over the head with a bottle by men who had followed him out.

The blow knocked him to the ground, and then he blacked out.

Ball believes he was attacked not because he was a Hillary supporter, but because of his sexual orientation.

He was doused in so much blood, it could have easily been mistaken for a gruesome Halloween costume.

He was doused in so much blood, it could have easily been mistaken for a gruesome Halloween costume.

Following the attack, Ball's friends acted quickly and took him to the hospital, where he received five staples in his head.

K.C. MacPherson, a friend of Ball's, posted photos of him on Facebook after the violent attack with a message that blamed Trump and his incessant push for discrimination against minorities — and in this case, the gay community.

"This hatred, bigotry, and senseless violence all comes from the same part of America that voted in a demagogue who spits hatred as his rhetoric," MacPherson wrote.

On Wednesday, Ball took to social media to report that he's doing OK following the attack and is thankful for all of the support.

What else should we expect once January's inauguration rolls around? Will it become a requirement to be on guard all the time, with our defenses up in case something we say or do doesn't appease the masses?

No one wants to live their life in fear, but this brutal beating in California is just one example of what could evolve into thousands of cases of discrimination and hate crimes following Trump's election.

And, we should focus on the fact that this all occurred in SANTA MONICA, a typically gay-friendly area where viewpoints and opinions are known to be respected and understood instead of criticized and slandered.

I believe New York City — my home for my entire life — to be extremely welcoming of equal rights for all. But now I have to consider that Trump's influence may cause those who follow his rhetoric to act out on his behalf, and feel that it's okay to do so.

I will continue being who I am, and representing the gay community, but I have to acknowledge that like Chris, I will be right in the crosshairs of those who believe I am wrong in doing so.

I don't want to have to look over my shoulder when leaving a bar, a restaurant or my apartment in fear of someone hurting me because of who I am, but I'm afraid I might have to.

And no one should have to live that way.