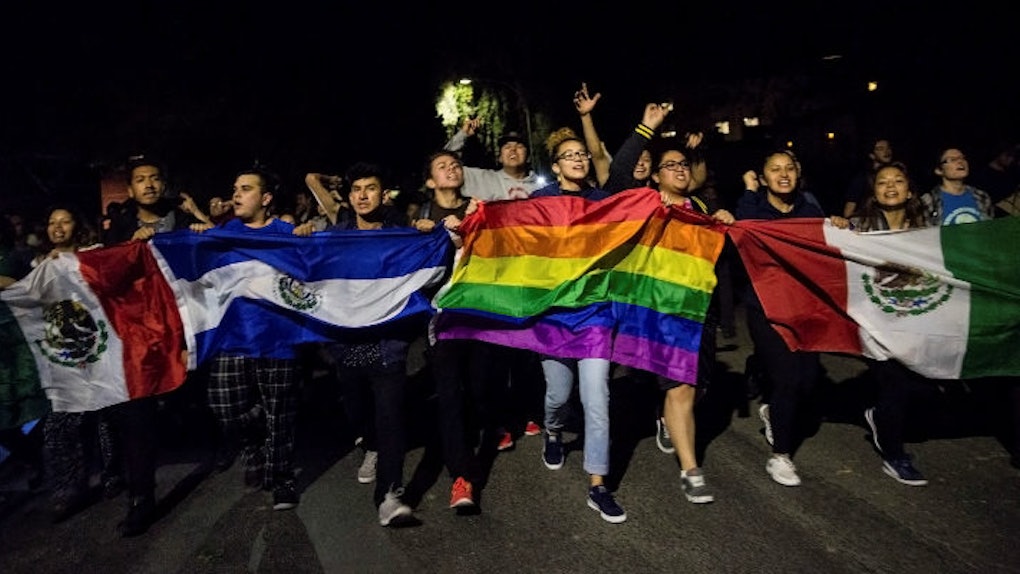 Our country was shocked this morning when they woke up from its night of binge-drinking on a Tuesday and recalled from its blackout, "Oh, my dear Lord. Donald Trump was elected president."

When I woke up in my cozy, Californian converted garage apartment, I was blissfully unaware. I didn't think of anything except how thirsty I was and felt nothing except a skull-cracking headache.

But then, in a flood, the memories of the night before came back.

I'm not ashamed to say I cried at the bar last night.

I'm just a little ashamed to say I cried this morning with my head in the toilet, throwing up all the free shots the bartender gave me to try to dull the pain.

The hangover snuck up on me like Donald Trump's win.

I never throw up from hangovers -- so I'm pretty convinced that the phrase "President Donald Trump" actually made me toss my cookies.

But maybe there's hope for us and my dear, current home state of California. While I'll always remain a New Yorker, if Calexit happens, I think I'll stay.

After Donald Trump was elected, Californians began standing up, and saying they want to leave the union.

The Yes California Independence Campaign wants to put a referendum on the 2018 ballot that, if it were to pass, would make California an independent country.

Hopefully, it does puff, puff, pass... (Get it? Because we just legalized recreational weed. #BlazeIt.)

(Also, fun fact: Cameron Diaz appears in this music video for "Charlie's Angels" and she said she used to buy weed off Snoop Dogg in high school.)

A statement from Yes California reads,

As the sixth largest economy in the world, California is more economically powerful than France and has a population larger than Poland. Point by point, California compares and competes with countries, not just the 49 other states.

While the Constitution has procedures for how a new state can enter the union, there's nothing for states who want to bounce.

So far, our chances of becoming a nation rely on a ballot measure that Californian voters pass.

There must be 400,000 signatures for it to appear on our ballot though, and they're hoping to reach that in 2018 when we elect our new governor.

Yes California believes California can achieve independence from the nation in one of two ways, with the first being:

A member of the California federal delegation to Washington would propose an Amendment to the U.S. Constitution allowing the State of California to withdraw from the Union. The Amendment would have to be approved by 2/3 of the House of Representatives and 2/3 of the Senate. If the Amendment passed it would be sent to the fifty state legislatures to be considered (to satisfy the "consent of the states" requirement in Texas v. White). It would need to be accepted by at least 38 of the 50 state legislatures to be adopted.

And the second being:

California could call for a convention of the states (which is currently being organized to tackle other constitutional amendments as we speak) and the Amendment granting California its independence would have to be approved by 2/3 of the delegates to this convention. If it passed, the Amendment would be sent to the fifty state legislatures to be considered and 38 of the 50 states would have to approve the measure in order for it to be adopted.

Earlier this year, Texas tried to jump ship, but it didn't work out and they were generally laughed at.

The Civil War helped establish the power of the federal government, and they have the final say in issues like this.

One thing is for sure...

Citations: Californians are calling for a 'Calexit' from the US — here's how a secession could work (Business Insider)