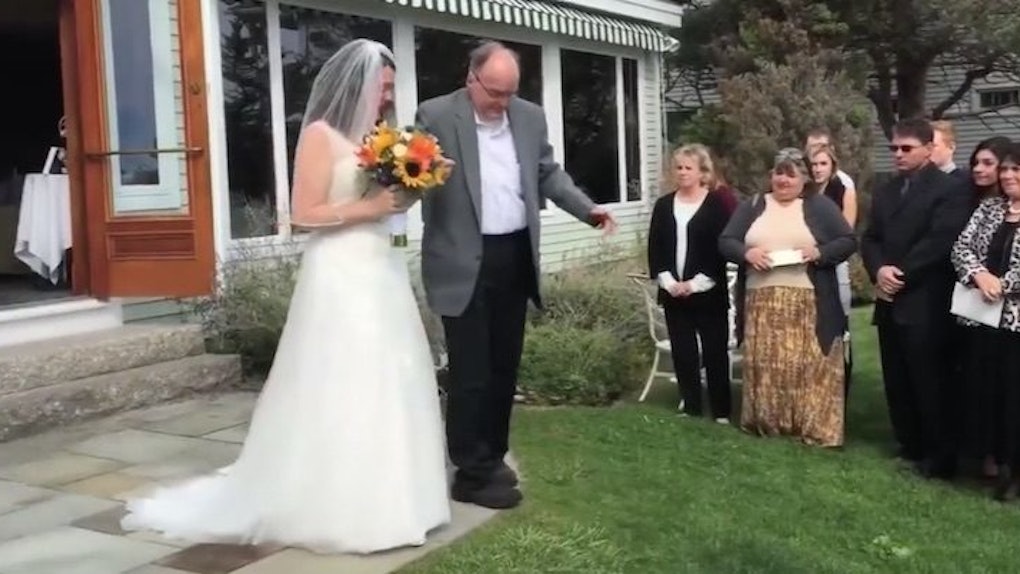 When it came time for Heather Duquette to walk down the aisle on her wedding day, her hopes were not high for her father, Ralph, to be able to walk beside her.

Raph survived leukemia but spends much of his life in a wheelchair as a result. Dedicated to the idea of giving Heather away, Ralph spent months in physical therapy, pushing himself to make enough progress to join his daughter on her walk.

On October 10, in Old Orchard Beach, Maine, Ralph gathered all the strength within him to surprise Heather.

As the bride approached the aisle, her father, who asked the DJ to buy him time by playing the wrong song at first, rose up with a little help and made his way to his daughter's side.

Train's “Marry Me,” the correct tune, began to play as Ralph and Heather slowly made their way toward the altar.

In a video of the event posted on Facebook, Ralph struggled a bit to make the short trip, but his daughter supported him with every step.

Dad surprises daughter on wedding day Not a dry eye in the house...Heather Duquette says her father is a leukemia survivor who wanted to give his daughter the wedding of her dreams. She had no idea he was going to walk her down the aisle. Such a beautiful moment.STORY: bit.ly/1GG9NP0 Posted by WGME CBS 13 News, Portland on Tuesday, October 13, 2015

In an interview with WGME, Heather recalled,

I was blown away and completely speechless. All I could do was cry and hope and pray we made it safely.

The pair made it safely, indeed, and each walked away from the wedding feeling exceptionally loved.

Citations: You'll Melt When This Cancer Survivor Gets Out of His Wheelchair to Walk His Daughter Down the Aisle (Cosmopolitan), Father surprises daughter with a walk down the aisle (WGME)