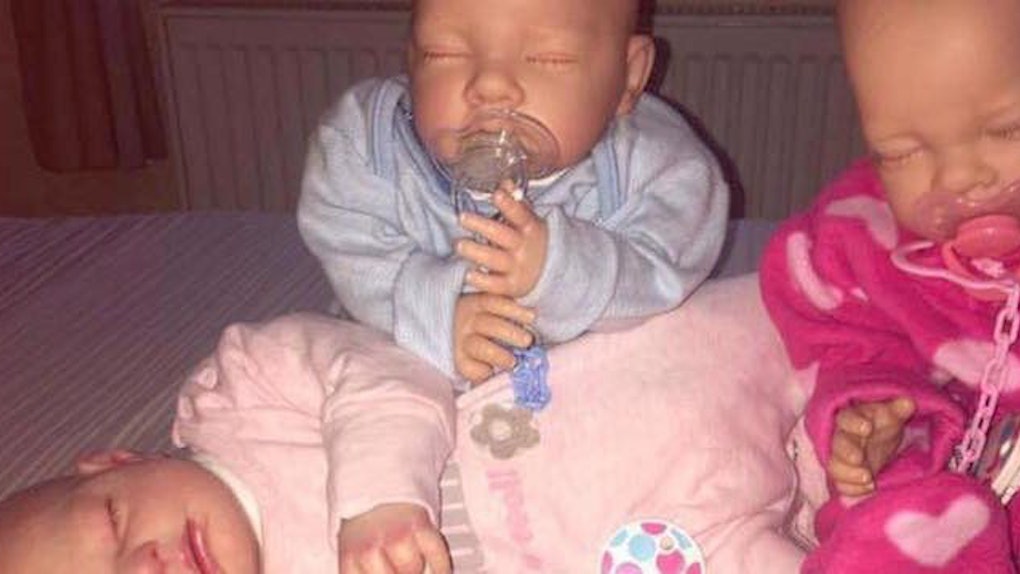 After being told they were unable to conceive children, a couple from Oxford, England, is raising three inanimate, plastic baby dolls as part of their family instead.

Jane Berry, 39, was told in her mid-20s that she was already pre-menopausal, which left her infertile and with both osteoporosis and arthritis.

"When I found out I couldn't have children it was like my world was turned upside down," Berry told The Sun. "I felt like I had been punched. I had to see people my age with babies I was really jealous. You have to be happy for them but you're hurting."

Instead of feeling barren and alone, Berry and her husband, 51-year-old Peter Marflee, decided they would create a happy family of their own by "adopting" three dolls. The couple named their baby girls Amy, Ashley and Chloe.

As expected, the public hasn't reacted too kindly to seeing Berry and Marflee out and about with the trio of baby girls, labeling the couple as "mad" and "crazy" and telling them to "go and get a real baby."

But that hasn't stopped the two from embracing the dolls as their own and making their family seem as authentic as they possibly can.

Now, Berry is much more confident about bringing her dolls with her wherever she goes. "I was petrified to take her out at first but now I am not ashamed. I'm not afraid to take them out.

We took them on holiday for two weeks in September for the first time. Sometimes I will feed them with a fake bottle. I will take care of them. You also have to pick them up like a baby. I have to use a dry make up brush to clean them. We also have a car seat in the van, they are spoiled.

The three dolls have also helped Berry recover from the death of her 62-year-old mother, Margaret.

Though Berry still struggles intensely with grief, taking care of the girls has helped her channel a real, maternal instinct. She claims she hasn't "been this happy in a long time."

“It makes you feel like you're a mum," Berry explains. "It's the same emotional connection and I love them.”

Even with criticism from strangers, it's great to see Berry is continuing to live her life and doing whatever makes her happy.

Citations: Childless couple care for their plastic dolls as if they're babies (Metro.co.uk), Woman told she was infertile at just 22 now has three DOLLS she sees as her kids – taking them shopping in special car seats and even on HOLIDAY (The Sun)