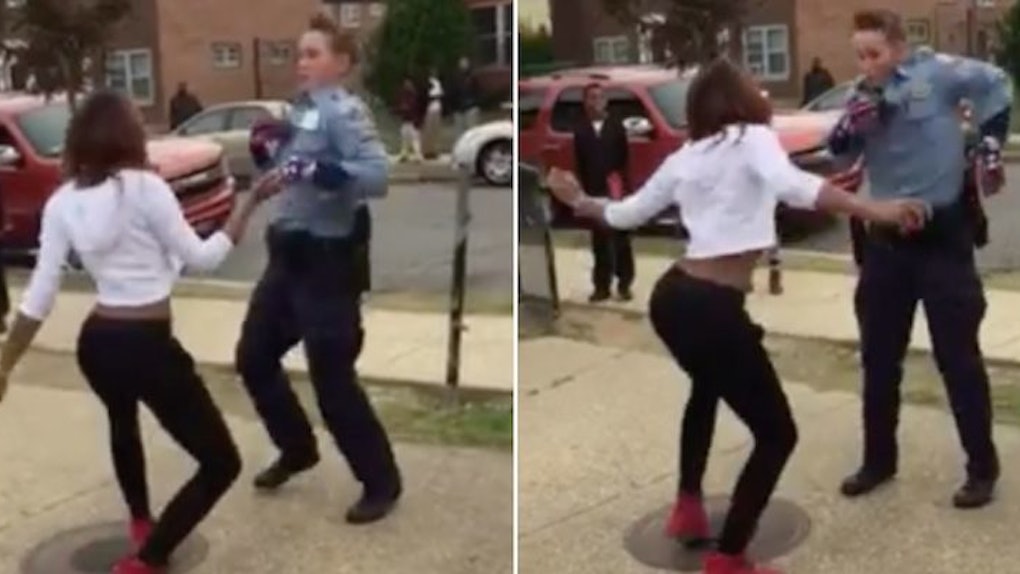 Being a cop is serious work. It isn't easy to police entire communities, especially when those communities think you're the bad guy.

But that doesn't mean police don't let loose every now and then and have fun.

On Monday, a DC cop participated in an epic dance-off with 17-year-old Aaliyah Taylor after the teen approached the cop and started playing Silentó's “Watch Me (Whip/Nae Nae)” on her phone.

A video of the unexpected encounter made its way to the Internet where it already racked up more than 250,000 views.

Taylor told The Washington Post the cop originally approached Taylor and her friends to order them to disperse. Instead, Taylor and the female officer made an agreement: If Taylor won a dance-off, the teens could stay; if the officer won, they'd leave.

Instead of us fighting, she tried to turn it around and make it something fun. I never expected cops to be that cool. There are some good cops.

The pair took turns dancing and amicably agreed to call it a tie in the end -- the cop had some slick moves.

Secretary of the DC Police Union Marinos M. Marinos said although law enforcement has gotten a bad rap as of late, these sorts of friendly encounters happen often.

We are humans just like everyone else. [Every day] we come in contact with thousands of citizens and almost all of them have positive outcomes.

Check out the officer's impressive moves in the video below.

So basically I was trynna get to this girl but the police told me to go home so we made this deal if i win u leave but if u win I step andddddd she step Posted by Adore Liyah on Tuesday, October 27, 2015

Citations: A D.C. cop tried to break up a group of teens. It ended in this impressive dance-off. (The Washington Post)