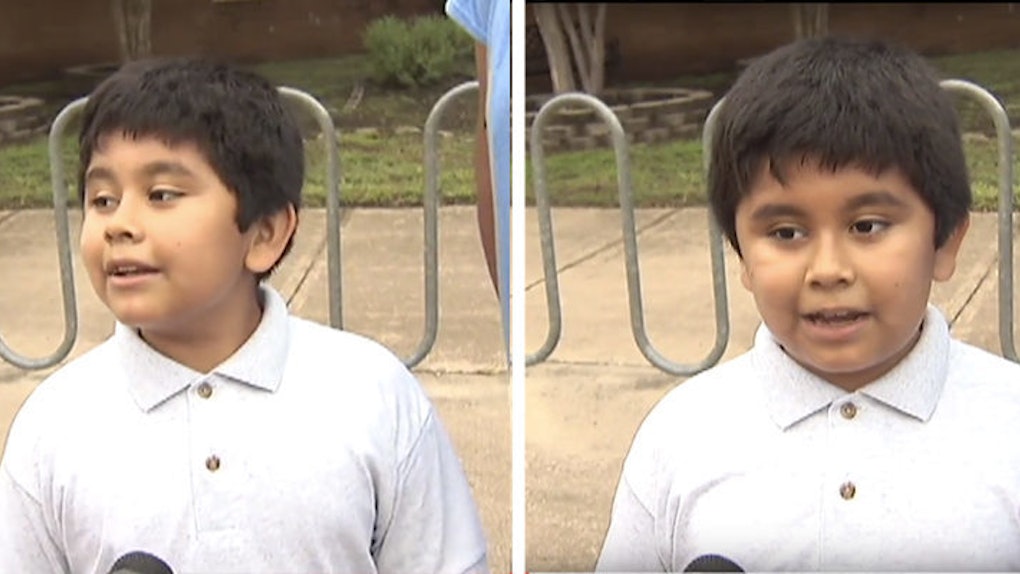 Kevin, you are my one and only forever role model until the day I die in outer space saving rescue alien children from a starship fire (I'm assuming). Honestly, my only aspiration in life is to have an ounce of your optimism and grace.

Let me set the stage here. Kevin, who is entering fourth grade, gave an interview to a news team about it being his first day of school, and he simultaneously broke our hearts into a thousand sharp splinters and there carefully reassembled them to make the fuller and more durable than ever before.

He explains he's going to a new school this year, and hopes to make more friends. Specifically, he wants to make more than one friend, which is the number of friends he acquired at his last academic institution. A lot of people would find this track record disheartening. But a lot of people have 1 percent of Kevin's optimism and spiritual fortitude.

I'm hoping I can make more friends than just one.

He goes on to explain his favorite subjects are math and science, which he will need to know in order to be an inventor.

Before the interview ends, he asks if he can say something. You'd assume what he's about to say is something along the lines of “GO COWBOYS,” or “REST IN PEACE HARAMBE,” or any other standard, cookie-cutter thing a person would say on camera with the news — but not Kevin. Kevin chooses his moment in the spotlight to salute his peers and wish them luck in the new year.

Hello students. And also, have good luck when you enter fourth grade or fifth grade.

That is why I'd like to officially nominate Kevin for president.

Actually, now that I think of it, Donald Trump pretty much possesses all those qualities. BLAM! If you didn't think a post about a cute kid on his first day of school could get political, YOU WERE WRONG.