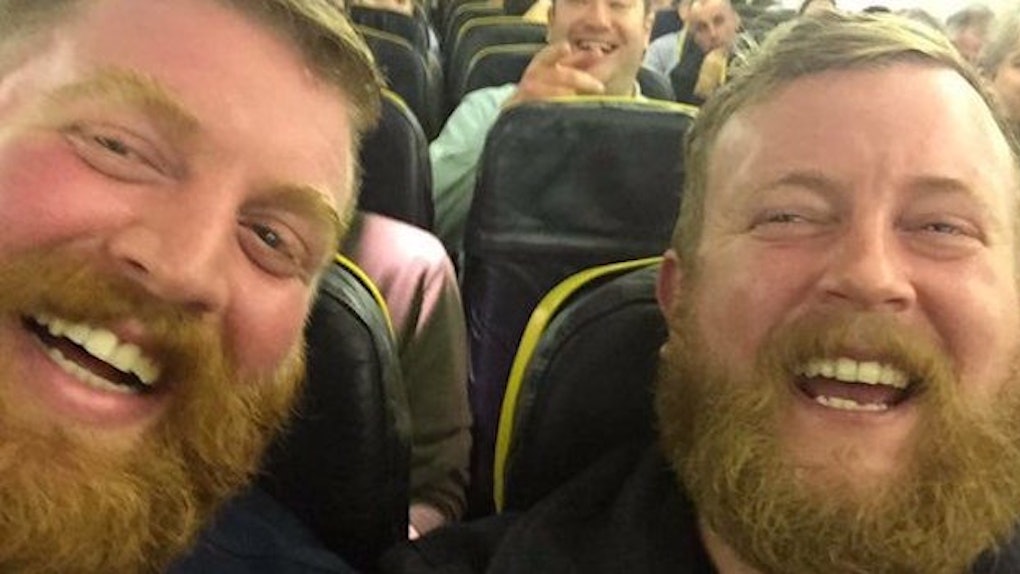 When Neil Douglas boarded a Ryanair flight from Stansted, London to Galway, Ireland on Thursday, he found his seat was already taken by himself.

Confused? Don't be. Robert Stirling, Douglas' doppelgänger, mistakenly ended up in his lookalike's seat after boarding.

Rather than send Stirling packing, Douglas snapped a selfie with his newfound twin.

A friend of Douglas' wife shared the photo on Twitter and marveled at the resemblance.

The *bEarDed BeAuTieS* hopped off their flight to discover they booked stays at the same hotel and shared a celebratory beer that night.

In an interview with Daily Mail, Douglas, 32, recalled,

I asked him to move and when the guy looked up, I thought, 'Holy sh*t, he looks like me.' We had a big laugh about it – everyone had a laugh. We took a selfie and that was it. I later checked into my hotel in Galway to find my doppelgänger checking into the same hotel ahead of me. Total weirdness.

An effort to do a selfless deed landed Stirling, 35, in Douglas' seat.

I had actually swapped my seat on the plane so that a couple could sit together. Neil suddenly appeared next to me and all my mates started shouting, saying that we had to take a picture. We chatted on the flight for just over an hour, he was a very nice guy… We saw him in a few pubs that night. We ended up socializing and quite a few people pointed out that we looked very similar. It's just funny really -- it must be a ginger beard thing.

If these guys are smart, they'll keep in touch in the event either is up for some life-trading hijinks à la "The Parent Trap" or (JT deep cut) "Model Behavior."

Citations: Separated (from razors) at birth? Bearded man meets his doppelganger when he's randomly seated next to him on Ryanair flight (Daily Mail)