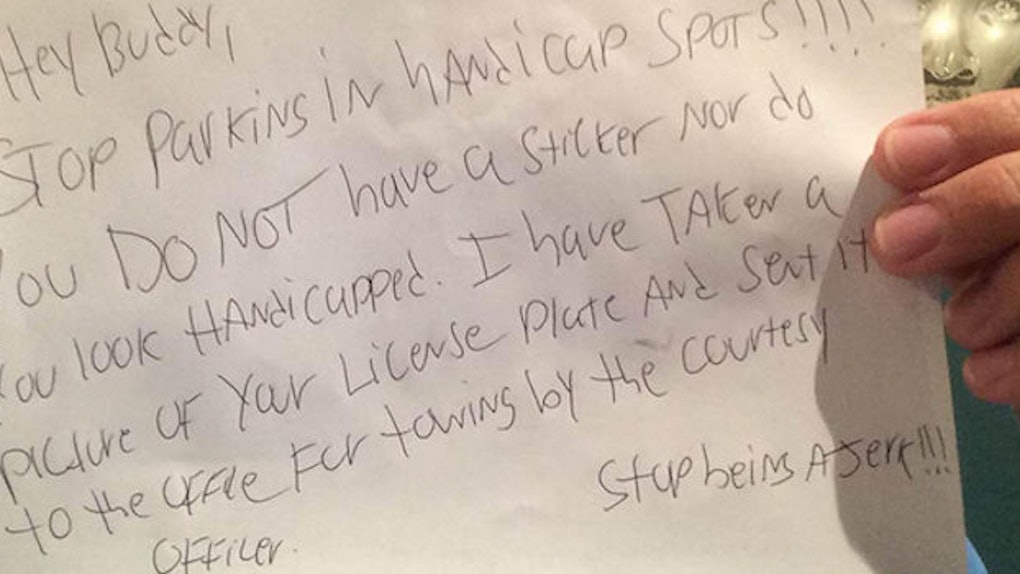 This disabled Army vet's response to someone who left a note on his car claiming he didn't “look handicapped” enough to park in a handicap spot is perfect.

It's no secret being an Army veteran comes with its fair share of obstacles -- ones that are often magnified if the veteran in question sustained physical injuries while on tour.

Although many injuries sustained in combat are outwardly visible, those that don't necessarily present themselves aesthetically can be just as painful.

One veteran who apparently suffers from such an injury recently found the following letter on his car.

The mystery author with the world's worst handwriting started the letter with,

The person then went on to threaten the Army veteran, saying he or she had taken a picture of his license plate, called the courtesy officer and was planning on having the vehicle towed.

He or she finished off the letter by signing with a subtle,

Stop being a jerk.

His systematic takedown of whoever left the letter is everything.

It was brutal from start to finish.

It started off legally brutal:

He then switched over to physically brutal:

Although I may not 'look' handicapped to you, I can assure you that the ammount of pain I feel in my lower body from walking due to combat-sustained injuries far supersedes any evel of pain you have ever felt in your entire life.

Then, he went to being aggressively brutal:

I think I'm going to frame [the letter] so I can look at it every day as to remind myself of what kind of person to NOT be.

And he ended with a personally brutal attack:

Owned. Maybe don't mess with a guy who can physically and mentally take you out.