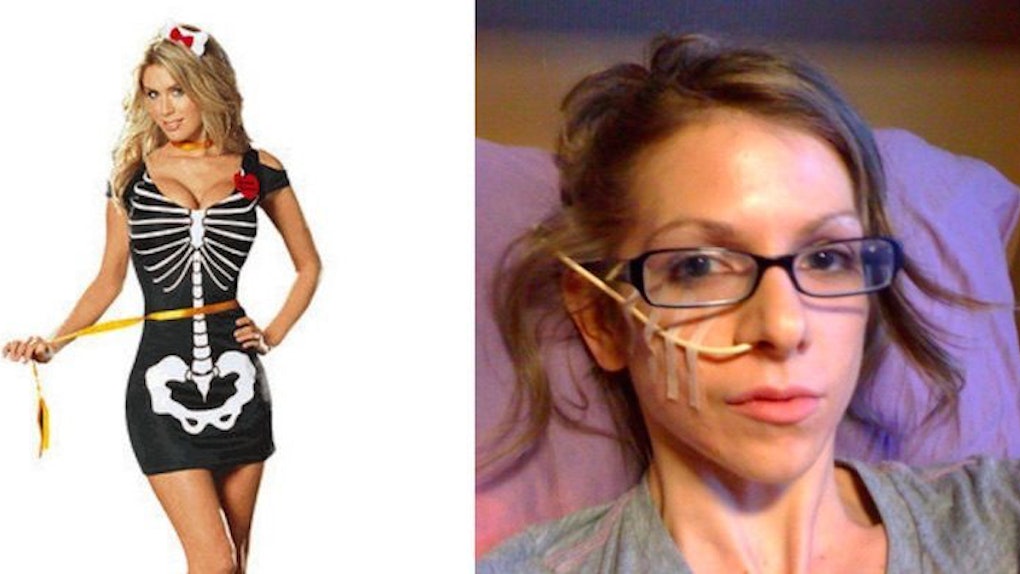 Woman's Response To This Horrible 'Anna Rexia' Costume Is Heartbreaking

This is probably one of the worst Halloween costumes of all time, and Jessi Davin's response to it is perfect.

The line between tasteful and over the top is tested yearly by people dressing up and seeing if their genius ideas to wear things like "Boston Marathon Bombing" costumes are OK.

Why? Why take a dig at a serious problem many people face? Why not even just call it “Sexy Skeleton” or “Sexy Bones” or something like that?

Every Halloween, this costume pops up, and every year people get infuriated by it.

Jessi Davin, who suffers from anorexia herself, posted to Tumblr about the costume, and her response is as powerful today as it was when it was first uploaded.

The worst part is, this costume is still available. You can still buy this costume, and you can still technically go as the personification of a sickness that regularly kills people.

If my post helps spread awareness for anorexia and other eating disorders and helps those who don't understand maybe comprehend just a little bit more, then I've accomplished what I set out to do.

Her story doesn't end there, though.

In June, she announced she was expecting a baby with her husband.

Because of her eating disorder, this pregnancy is considered a high-risk pregnancy.

Because of her history with anorexia, Jessi is back in treatment to ensure it doesn't have any effect on her pregnancy or her baby.

Hopefully, Jessi's message will be a conduit for change and leads to the costume being taken off shelves.