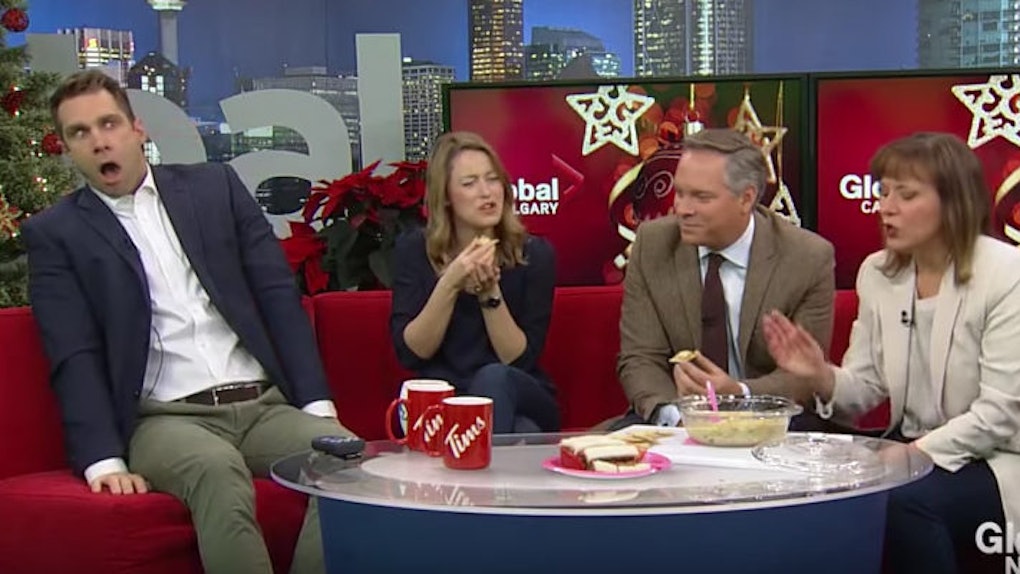 There's nothing funnier than TV anchors getting orally tortured on-air with horrible food.

That's exactly what happened when TV anchors on Global News Calgary taste-tested some of their cohost's artichoke dip:

In fact, the traffic reporter who made the dip, Leslie Horton, admits that something went very awry in the creation of this noxious treat.

It's artichoke dip, but something went terribly wrong.

However, despite these warnings, meteorologist Jordan Witzel decided to give it a try.

His weather forecast? A cloudy dip, with a chance of VINEGARY AWFULNESS IN HIS MOUTH HOLE.

Then, like a lemming following her friend off a cliff, another cohost decided to wolf one down.

In fact, after Jordan spit the unholy concoction into a biohazardous waste container napkin, he said,

See, this is where the little bits of chemistry come in to play, Leslie, things didn't combine properly.

It's like the Frankenstein monster of the holiday appetizer season.

I mean, some of these anchors' responses are perfect when given the "that's what she said" treatment to them.

I can't swallow it.

I mean, it's almost too easy.

OK, maybe not that one so much.

Amber had only one thing to say in response to the gross AF dip:

Man, if it burns, I'd recommend getting tested... for AD (artichoke dip).

Of course, Jordan finally got to the bottom of why this dip tasted like, in the words of Leslie herself, a "foot wrapped in barnyard laying in the hot sun!"

Oh, yes. Pickled artichokes sound like a horrendous idea for a dip. This explains a lot.