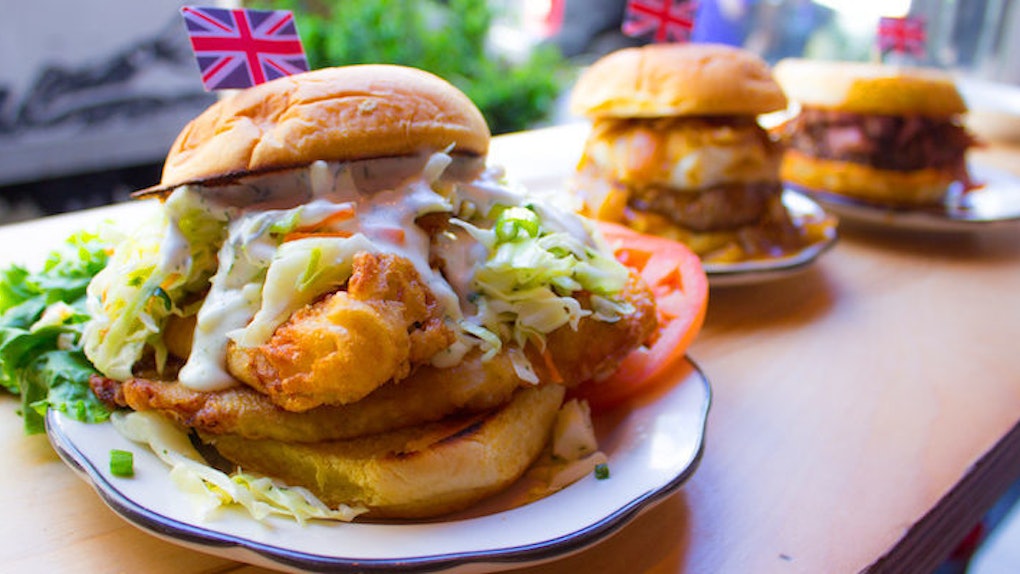 'ALLO, GUVNA! WE'VE WHIPPED UP A BATCH OF BRITISH CELEBRITY BURGERS THAT'LL MAKE YOUR BLOODY MOUTH CHIP, CHIP ALL THE WAY TO PICCADILLY CIRCUS, ALL RIGHT, ALL RIGHT.

British food for the most part kind of sucks. It's all gray and has names like “Blood Pudding,” “Spotted Dick” and “Prince Henry's Foreskin Pie.” It just seems like the least appealing subset of food. India has cool spices, and Japan has sushi, but what does the UK have? Tea, the most boring of hot drinks, and biscuits, the most boring of breads?

It's unfair because Britain is responsible for other great things that deserve better food to be associated with. The Beatles! Kate Middleton! Being a cop who walks by some pickpocketers and says, “What's all this then?” Those things deserve quality food, and if there is anybody who knows about quality food, it's the USA.

So, we decided to team up with our friends at Black Tap NYC -- the restaurant you may remember from its Kylie and Kendall milkshakes -- to produce a series of burgers inspired by some of Britain's pop-modern royalty.

British sandwich + American song = the perfect union of our nations.

You can barely tell I was the one to sing these covers.

Once again, it's uncanny how much I sound like the original song.

That's a wrap on British celebrity burgers -- just in time for the “Game of Thrones” premiere this Sunday!*