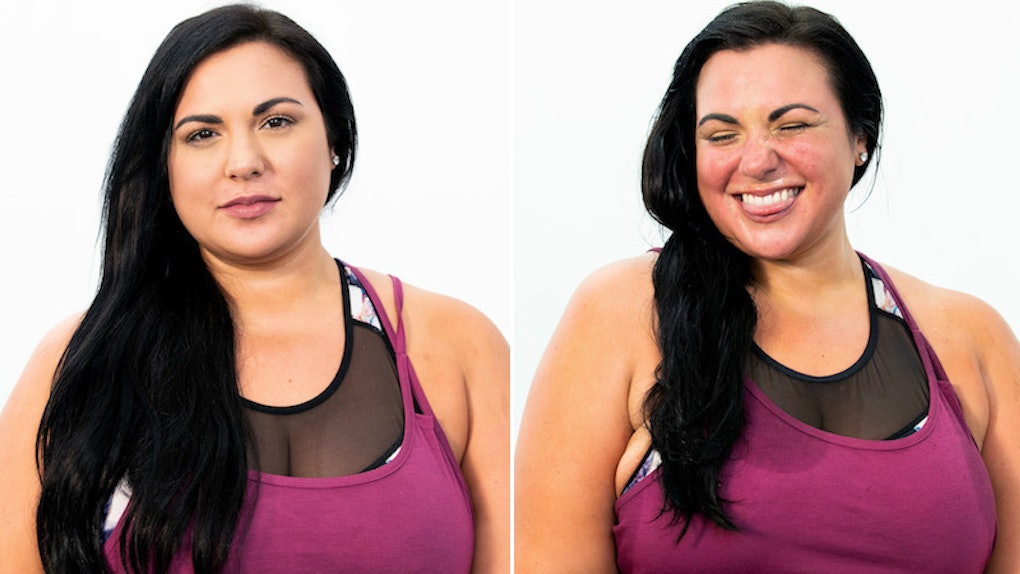 Picture this: You just got done with your workout, and despite the strands of sweaty hair plastered to your forehead and your beet-red complexion, you have a goofy smile on your face that's practically contagious, and you're riding a blissful, stress-relieving high that seems to last for ages. If you know exactly what I mean, that's because there's an emotional transformation that happens post-workout — one that simply isn't captured in a typical "before and after" snapshot. Zumba's Before and After Project is celebrating World Mental Health Day, which takes place every year on Oct. 10, with a series of photos depicting post-workout transformations that have nothing to do with physical gains, and everything to do with the psychological changes that happen when you move your body in ways that you love.

You've probably heard of Zumba and its iconic fitness program, which invites you to quite literally dance your heart out in a mood-boosting workout class. Well, in case you weren't already obsessed with the workout program, Zumba has now teamed up with celebrity photographer, Raven Varona, to "redefine the fitness industry's before and after photos in honor of World Mental Health Day", according to an exclusive press release shared with Elite Daily.

Through a powerful series of photos, Zumba's Before and After Project aims to shed light on the positive and long-lasting effects that exercise can have on mental health and wellness as a whole.

The concept behind the project is relatively simple: According to the initiative's press release, Varona's photos highlight the emotional changes that everyday people, just like you and me, go through before and after working out — specifically, in this photo series, before and after taking a Zumba class. While the "before" photos are relatively neutral, the "after" photos depict "bigger smiles, more radiant skin and a jovial demeanor from each participant," as per the project's press release. It's a refreshing approach, especially given that a typical before-and-after picture usually focuses only on the physical changes a person experiences following a workout program, and not so much on the psychological changes that can happen.

“When I saw Zumba for the first time, the thing that struck me the most was that everybody was smiling,” Zumba CEO, Alberto Perlman, said in a statement for the press release. “Happiness seemed to be the objective of the workout, with fitness as the result. Years later, I started hearing how Zumba was turning lives around and helping people get through hard times, or mental illnesses including anxiety, postpartum depression and PTSD. It’s truly unbelievable the way we are seeing the Zumba movement positively impact people in our communities.”

According to a recent study of 1.2 million people in the U.S., published in the journal The Lancet Psychiatry, people who exercise, on average, experience 1.5 fewer days per month of poor mental health compared to people who lead a more sedentary lifestyle. What's more, the same study noted that positive mental health was found to be associated with "team sports, cycling, aerobic and gym exercise (reduction in poor mental health days of 22.3%, 21.6%, and 20.1%, respectively)," as per ScienceDaily — which might just explain some of the powerful before-and-after expressions you'll see in Zumba's photo series. Here are a few of those inspiring photos, and some of the additional mental health benefits associated with exercise.

Exercise Is A Natural Antidepressant

According to research published in the Journal of Psychiatric Practice, just three 45- to 60-minute workouts per week can be an effective way to reduce symptoms of depression. Perhaps it's time to make Zumba part of your weekly routine?

Working Out Can Make Anxiety Easier To Deal With

The boost of endorphins that your body gets during exercise — and which you can clearly see in this woman's carefree smile in her "after" photo — "produces feelings of happiness and euphoria," according to Walden University, which in turn can help to reduce symptoms of anxiety.

You'll Probably Be Less Stressed After A Sweat Sesh

The Anxiety and Depression Association of America states that "regular participation in aerobic exercise has been shown to decrease overall levels of tension," as well as "elevate and stabilize mood" — and the before-and-after expressions on this dude's face totally prove it.

A 2017 study published in the academic journal Psychology of Sport and Exercise revealed notable improvements in self-image for college-aged women after just 30 minutes of exercise. By making sure you're doing even just a few minutes of mindful, joyful movement each day, you can significantly increase your self-esteem — sweaty smiles and all.

The aging process is inevitable, but according to research published in the medical journal JAMA Neurology, a consistent workout routine is associated with "a decreased risk of dementia and Alzheimer disease," which are both cognitive health conditions.

BTW, yes, I will most definitely be that one overenthusiastic grandma who's still dancing her heart out in Zumba class 50 years from now.

Mindful Movement Can Improve Your Memory

If you're admittedly a little forgetful from time to time, first of all, same. But here's the good news: A recent study, published in the scientific journal NeuroImage, found that just 15 minutes of exercise is associated with improved memory — so just imagine what an hour-long Zumba class could do for your mental health.

You'll Likely Sleep Better If You Exercise On The Reg

In a recent interview with Elite Daily, Autumn Calabrese, a celebrity fitness trainer and creator of the 80 Day Obsession workout plan, explained that a regular workout routine can help your sleep schedule stay on track by improving your circadian rhythm, aka that little clock inside your body that determines how alert you are in the daytime and how sleepy you are come nighttime.

"When [the rhythm] is off, your sleep is off — exercising improves this by bringing on better, deeper sleep," she said.

Your Productivity Gets A Boost From Your Sweat Sesh, Too

Once you get familiar with a set routine for your workouts, Calabrese told Elite Daily that that commitment tends to influence the rest of your life, too.