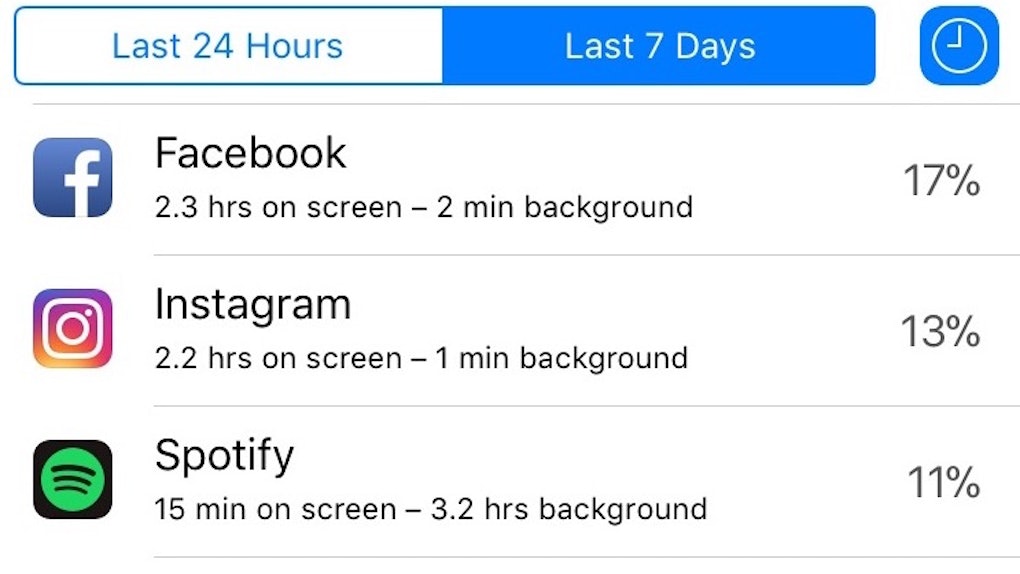 I've reached a level of acceptance where I can (ashamedly) admit that I am on my phone way too much. I even try to make sure any outfit I wear has pockets just so I can carry my phone around the house with me (judge accordingly). While knowing that you are swiping and scrolling far too many times a day is one thing, it's a very different insight to find out the actual number of minutes (or hours) you've spent on your precious iPhone. Brace yourself, because now you can see how much time you spent on your iPhone by using this battery hack.

One curious Twitter user, @BrettSVergara, decided to check out his app activity in the iPhone's battery settings, and then he shared this hack for all of Twitter to see. Brett S. Vergara (who is a BuzzFeed community strategist, according to his Twitter bio) tweeted on Wednesday, Jan. 3 that he had learned how to find out exactly how many hours you spend on each app. All you do is go to "Settings" and then scroll down to "Battery." Then, you'll see two buttons that say "Last 24 Hours" and "Last 7 Days" (some users have the 4-day option, apparently). Next to those options, you'll see a clock icon. If you click on the clock icon, you'll see how many hours you've spent on each app. Clearly, the results weren't what Vergara was hoping for because he ended his tweet with "...and now I wanna die."

Of course, he likely meant that the number of hours he spent on his phone was higher than he would have liked to seen when he wrote, "...and now I wanna die," but he was not alone in this "What have I done?" feeling.

People immediately began responding and worrying about what their own battery usage stats might reveal.

Only two little words were needed to express their fear of the battery stats.

If you don't look, then it doesn't really exist, right?

One brave soul responded with her own results.

Vergara didn't provide his own stats, but he could relate to the previous one.

This terrified toddler is everyone when they see how much time they've spent on Snapchat.

Just turn around, and everything will be OK.

The news of this latest hack was largely an unwelcome bit of information.

As someone who regularly dims her phone down to a barely visible level in order to save battery power, I was not too pumped to check out my stats when it came to my app usage. As soon as I charged up my phone (I am forever connected to an outlet), I headed to my Battery settings and checked out the damage.

I was surprised to see how much time I spent on Facebook, but the rest of my stats seemed pretty accurate. I also learned that staying off of social media could probably do wonders for my phone's battery life.

Fast-dying batteries are a common problem among iPhone users, but it's not all your fault. Apple recently admitted that the company has been limiting how much power an iPhone processor can draw in certain situations in order to prevent the phone from randomly shutting down. The company stated that they did so on older iPhones because older batteries don't operate at peak performance.

While the news that your iPhone is slower due to steps taken by Apple might be a little maddening, the company had some good news to share with its customers as well. Users of older iPhones can now get battery replacements for out-of-warranty phones for just $29, according to Apple.

So, if your app usage stats look bleak and your battery quickly dwindles down to zero on the daily, a new iPhone battery might help. I mean, you could cut down on your Instagram time to save power, but do you really want to give up creating killer Instagram Stories? Probably not. So, just grab yourself a new iPhone battery on the cheap, and keep Superzoom-ing to your heart's content.