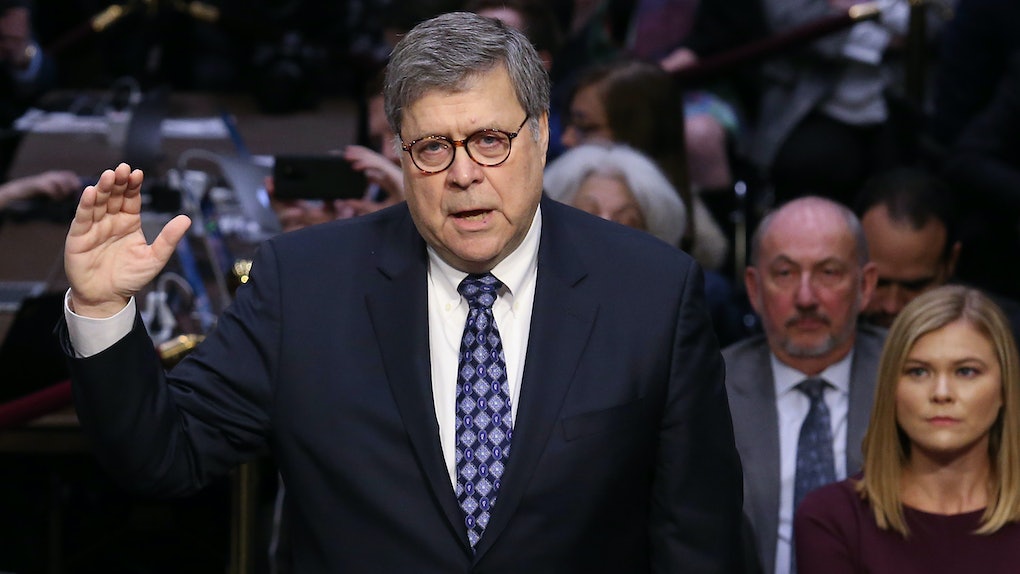 On Tuesday, Jan. 15, the new nominee for attorney general went before the Senate for the start of his confirmation hearings. Following President Donald Trump's announcement in December that he'd nominated William Barr to take over the role, questions have circulated as to his views on the special counsel investigation into possible collusion between the Trump campaign and Russia in the 2016 election. And so far, William Barr's quotes about Robert Mueller and the Russia probe offer a clear view on where the nominee says he stands.

In the past, Barr has been critical of Mueller's investigation into possible collusion between the Trump campaign and Russia, telling the Justice Department in a 20-page memo that he didn't feel the probe was legally justified, and has also been outspoken against it in the media. In the original memo, Barr downplayed the allegations regarding potential obstruction of justice against the president, per The Washington Post, and suggested that investigations should instead focus on the Clintons. He also reportedly called the Mueller investigation "grossly irresponsible" and suggested that the inquiry into possible obstruction of justice was "legally insupportable."

But in his remarks Tuesday, at least, Barr presented himself as determined to respect the special counsel's work and follow the regulations around it. When asked about that memo, Barr said that he was concerned about the implications about the scope of the probe and a potential "chilling effect" of the special counsel's regulations beyond this case. However, he also asserted that he believed that the Mueller investigation should be allowed to proceed to its conclusion.

On Tuesday, sitting before the Senate Judiciary Committee, Barr said of Mueller and his investigation:

I believe it is in the best interest of everyone ... that this matter be resolved by allowing the special counsel to complete his work. ... On my watch, Bob will be allowed to finish his work.

These comments stuck pretty close, almost word for word in fact, with what the nominee had reportedly planned to say.

In the hearing, Barr also broke with the president by saying that he believed former Attorney General Jeff Sessions was correct in recusing himself from the investigation early on due to his involvement with the Trump campaign. "I think he probably did the right thing," he said of Sessions' recusal. The president had frequently criticized Sessions for his choice to recuse himself.

Barr also told Graham that he thought of Mueller as a "good friend," a point that some took issue with. Some called this out, as Trump has bashed Mueller for his own connection, (which was, apparently, grossly exaggerated), with former FBI director James Comey, whom Trump fired in May 2017.

If confirmed, Barr, who previously served as Attorney General under President George H.W. Bush, would replace Acting Attorney General Matthew Whitaker, who took over in November when Sessions was ousted on Nov. 7. However, while Barr has raised questions due to his aforementioned memo, many criticized the temporary appointment of Whitaker for an even more dramatic take on the Mueller investigation. Shortly after his appointment, it was revealed that Whitaker had previously written an op-ed critical of the Mueller investigation, which suggested that it had "gone too far" and that the Department of Justice (DOJ) should put limits on it. Neither the White House nor the DOJ replied to Elite Daily's request for comment at the time.

Still, it was evident going into the hearings that people were concerned about Barr and his potential handling of the Mueller case, as well as others pertaining to coordination with Russia.

It's worth noting other criticisms about Barr's history, too, among them that he oversaw a program that sent Haitian asylum seekers to Guantanamo Bay in the '90s, while serving as attorney general under the elder Bush. In an interview in 2001, Barr later defended the move as not politically motivated, but added, per CBS News, "You want 80,000 Haitians to descend on Florida several months before the election? Come on, give me a break." Elite Daily reached out to Barr for comment on the program and comments but didn't receive a response as of publication.

Barr has also come under scrutiny for his role in pardons issued under Bush after the Iran-Contra scandal, an investigation for which unfolded under President Ronald Reagan. As with the Mueller investigation today, the investigation into an arms deal between the U.S. and terrorists who were holding U.S. citizens hostage in Lebanon officials concerned high-ranking Washington officials.

Barr had advised Bush on and was supportive of the sweeping pardons for officials involved in the scandal. At the time, per NPR, the independent prosecutor, who served a role similar to Mueller's today, called these pardons a "miscarriage of justice."

Later on, NRP adds, Barr defended the pardons by saying Bush had made the right call on the Iran-Contra pardons and added, "I favored the broadest pardon authority." As of publication, Barr had also not responded to Elite Daily's requests for comment about the pardons or his comments on them.

The Senate hearings to confirm Barr are slated to run through Wednesday, and a vote will follow. If he is voted through, he'll once more become the nation's attorney general during a major FBI investigation that has reverberated far beyond Washington. Only time will tell if he will stand by his word to allow the investigation to complete.