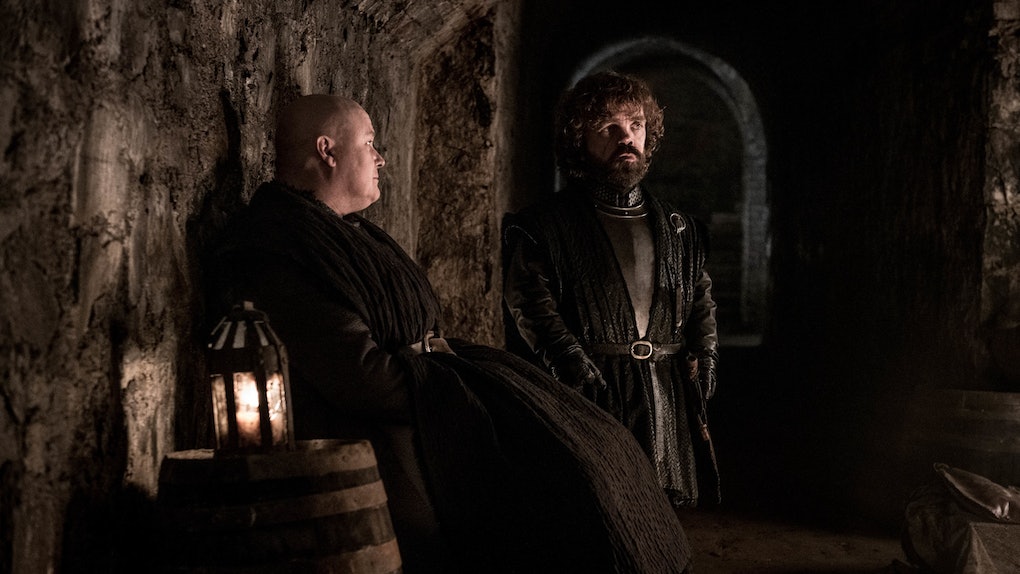 Will Tyrion Betray Daenerys On 'Game Of Thrones'? Things Aren't Looking So Good

One of the pleasures of Game of Thrones is that it turns the tropes of high fantasy on their heads. The series uses the audience's expectations of how characters in their position usually act and twists it around. It's why, for many, the show seems so unpredictable. It's also why viewers get so upset. Daenerys just led her army to conquer the greatest evil, therefore taking down Cersei will be easy, right? Wrong. Instead, Daenerys seems to be tilting towards full "Mad Queen" to win this war, and fans are worried. Will Tyrion betray Daenerys on Game Of Thrones? It certainly feels like the show is setting up for such an ending.

There was a lot going on in Episode 4 of Game of Thrones, "The Last of the Starks." Daenerys made the fatal assumption that winning one war would somehow make the next one easy, and lost both Rhaegal and Missandei for her mistake. One would think that would be enough of a bad day. However, alongside one Targaryen mistake came another: Jon Snow told his sisters the truth about his heritage. As someone who is utterly terrible at playing the game of thrones, and has had the privilege of rising in the ranks without having to learn, he refused to comprehend the impact of this piece of information.

But Sansa did. Moreover, when allowed to play her card, she used it on Tyrion. He's someone she knows harbors an affection towards her and, as Daenerys' chief advisor, is a person she would need to turn to their side if there was any hope of removing the Mother of Dragons from the board.

Tyrion didn't flip immediately, but he did the next best thing. He told Varys, who practically flipped alliances before Tyrion could finish getting the words out. It left Tyrion arguing to continue supporting Daenerys at a moment when things were most dire, and when her behavior was handing ammunition to her would be mutineers right and left.

Game of Thrones may be all about that trope-twisting life, but it does have a formula. Characters are never more in danger than when they are in the grip of a self-righteous fever. Consider Ned in Season 1, convinced Cersei would follow the code of honor he prizes above all else. There was Tyrion in Season 2, nearly killed in battle, and then put on trial in Season 4, all because he convinced himself he was doing what's best for the people. Catelyn Stark believed the family's allies would understand the noble Stark motives right up until Robb was murdered in front of her, Jon Snow believed the Night's Watch would come around to his way of thinking, right up until Olly put a knife in his heart.

Daenerys Targaryen is here to rip out Cersei root and stem, and at this point she's willing to match the Lannister Queen's ruthlessness, taking out half the population of King's Landing if she has to. It's that kind of blind self-righteous behavior that gets lead characters killed.

Will Tyrion, realizing the danger to the people, step in and take Daenerys down, rather than let her go full Mad Queen? Or will he stay loyal until the bitter end?

More like this
This 2021 'Game Of Thrones' Season 8 Trailer Is So Confusing... & So Good
By Ani Bundel
'Cobra Kai' Season 4: Netflix Release Date, Cast, Trailer, Plot, & More
By Ani Bundel
8 Theories About The 'Gossip Girl' Reboot That Simply Must Come True
By Rachel Varina
Stay up to date