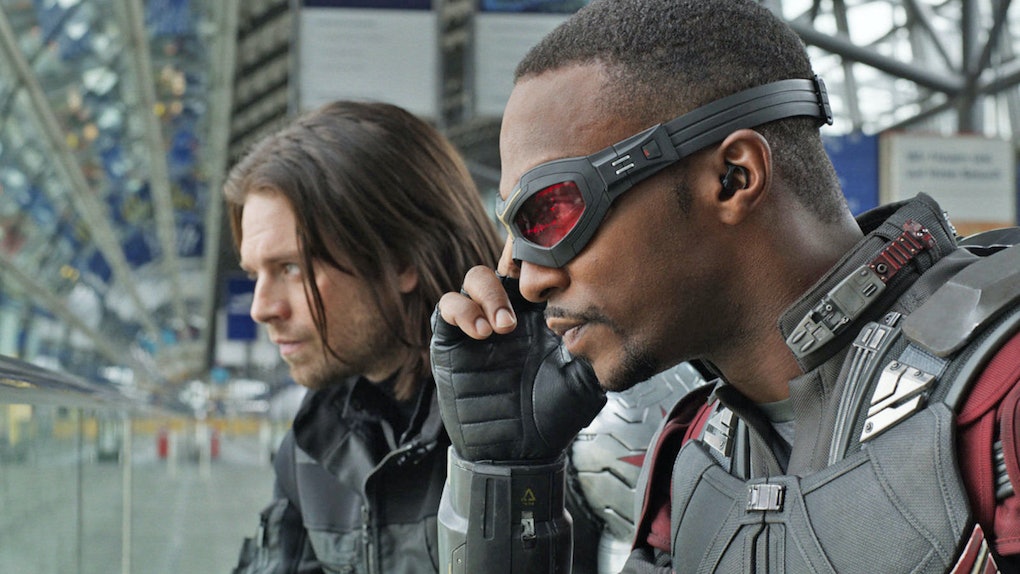 Will There Be A New Falcon? Sam's New Role After 'Avengers: Endgame' Has Fans Asking

The Avengers team does not look the same after Avengers: Endgame. The latest Marvel release introduced a ton of shocking changes to the superhero team that fans have been watching on the big screen for over a decade, and now we have more questions than ever about what the future of the Marvel Cinematic Universe could possibly look like. One pressing question is whether or not there will there be a new Falcon after the events of the movie. The comic books actually do provide a bit of a roadmap in to what will likely happen with Falcon moving forward, so let's get into it.

Spoiler alert: This post contains spoilers from Avengers: Endgame. Since he was turned to dust at the end of Avengers: Infinity War, Falcon sits out for nearly all of Endgame, but he actually gets a lot to do at the very end of the movie. Falcon comes in with one of the most uplifting moments of the movie, when after Thanos has severely beaten up on Captain America, Cap hears his old buddy's voice over the radio saying he is on his way with help. Talk about the understatement of the century — Falcon flies in through one of Dr. Strange's portals followed by every other previously dusted Avenger and all of their allied armies.

And that is only Falcon's second most emotional moment. After the Avengers defeat Thanos, Captain America is sent back in time to return all of the Infinity Stones to where they came from, but shockingly, he does not return through the quantum realm. Instead, Steve Rogers returns to the 1940s and lives out the rest of his life with the love of his life, Peggy Carter, returning to the site of his disappearance in 2023 as an elderly man. Sam Wilson tells his old friend that he is sad that the world now no longer has Captain America in it, but Rogers replies by handing over his iconic shield to Wilson, confirming that Wilson will take over the role as the new Captain America.

This moment actually does mirror the Marvel Comics, as Sam Wilson takes on the role of Captain America from Steve Rogers for a time.

And the moment also provides a whole lot more insight into the upcoming Disney+ streaming series Falcon and the Winter Soldier. Now, some fans think that the upcoming series will be renamed to Captain America and the Winter Soldier and focus on Sam Wilson inheriting his new superhero persona alongside Bucky Barnes. Wilson and Barnes did have a comic-book arc where they teamed up while Wilson was Captain America, so the new show could focus on that.

The other major question is whether or not the Falcon name will live on with another hero inheriting Sam Wilson's metal wings. If that is to happen, the only real candidate seems to be Wilson's ally Bucky Barnes, who currently operates under the codename Winter Soldier. Bucky already has a metal arm anyway, so why not give him Falcon's wings to match if Sam is not going to be using them anymore?

The good news is that we will definitely getting answers to these questions about Falcon and the Winter Soldier soon enough when their streaming series premieres on Disney+.