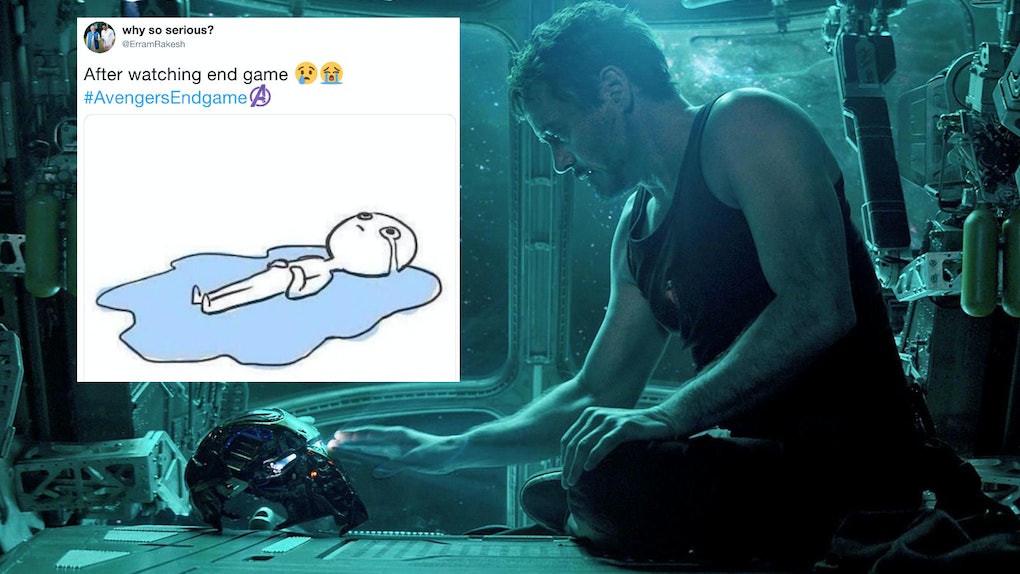 These Tweets About 'Avengers: Endgame' Will Make You Cry & Laugh At The Same Time

We all knew that Avengers: Endgame was going to be a hugely emotional experience, but nobody was prepared for just how hard the climactic scenes of the new movie hit. Look no further than Twitter to see just how much every Marvel fan is breaking down after the game-changing film. These tweets about Avengers: Endgame will show just how everyone is feeling about Endgame's biggest moments.

Spoiler alert: This post contains spoilers from Avengers: Endgame. The latest Marvel release serves as the culmination of 11 years and over 20 movies within the sprawling superhero universe, and with a three-hour runtime, everyone went in knowing that Avengers: Endgame could be packed with the most epic and memorable moments in the franchise's history.

As expected, the movie included super nostalgia-inducing time travel, incredibly epic battle scenes, and major character deaths that will send every Marvel fan straight to their therapist. Midway through the movie, Black Widow shocked everyone by jumping off a steep cliff on the distant planet of Vormir, sacrificing her life in order to attain the Soul Stone for the rest of the Avengers. Then at the end, Iron Man also dies, having overwhelmed his body by using the six Infinity Stones to finally defeat Thanos and his army once and for all. And just in case you were not absolutely bawling yet, Captain America is now on death's door as well, having become an elderly man after going back in time to live out the rest of his life from the 1940s.

With all of that emotion, it is no wonder most of the tweets about Avengers: Endgame are of people expressing their intense sadness:

It is not all tears, though. Since avoiding spoilers is such a major part of the Marvel fandom, some fans are also having fun with the movie's plot by posting photosets that may seem random to people who have not seen Endgame, but will immediately make sense to those who have seen the movie:

It is clear that Avengers: Endgame marks the final chapter in the Marvel Cinematic Universe for Robert Downey Jr.'s Tony Stark, and fans are paying tribute to him with his newly iconic phrase "I love you three thousand."

Amid all the sadness, though, Avengers: Endgame did subtly introduce a new hero into the Marvel Universe. Fans are singing the praises of the rat that was able to free Ant-Man from the quantum realm and effectively save the world by jumpstarting the Avengers' time-travel plan.

Of course, this is only the tip of the iceberg when it comes to tweets about Avengers: Endgame. Now that the highly-anticipated movie has finally hit theaters, you can expect it to completely take over Twitter for the foreseeable future. And thankfully, these Twitter jokes are the perfect salve for the emotional turmoil that Avengers: Endgame is putting every Marvel fan through right now, so next time you want remember Tony Stark and want to cry, just look to the Endgame hashtag for a good joke.

More like this
This Video Of Disneyland's Marvel's Avengers Campus Is Super
By Cianna Garrison
Is Netflix Making A 'To All The Boys' Spinoff Series About Kitty? Here's The Tea
By Rachel Varina
Here's How To Stream 'Nomadland' So You Can Finally Get The Hype
By Rachel Varina
Stay up to date