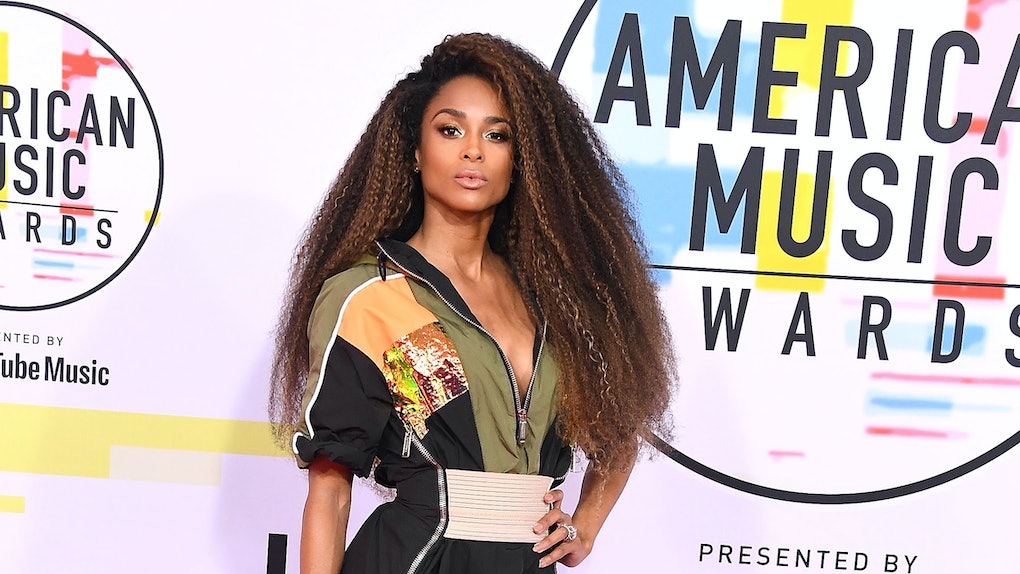 Will There Be A 2019 AMAs Host? They're Breaking The No-Host Trend

In 2019, shows like the Emmy Awards and People's Choice Awards went without a host. They're not the first shows to go host-less (the Grammys did eight times between 2003 and 2011), but, recently, there seems to be an uptick in shows forgoing the role to avoid any backlash the person selected may draw to the ceremony. As for ABC, it'll take its chances, because the 2019 American Music Awards will have a host — and she's perfect for the job.

The 2019 AMAs host will be dance-floor killer, sultry singer, and all-around boss babe Ciara. The gig comes just a year after Ciara set the stage on fire with a high-energy performance of "Level Up" with Missy Elliot at the 2018 AMAs.

On Nov. 17, she took to Twitter to share the news with her followers, writing, "Can’t wait to be your @AMAs host in one week!"

Actor Tracee Ellis Ross hosted the awards show in 2018 and opened with an epic dance number, paying tribute to Beyoncé, Jay-Z, Cardi B, Bruno Mars, Aretha Franklin, and (the new mistress of ceremonies) Ciara, so it's safe to say fans can expect Ciara to bless viewers with a few mini-performances.

Ciara is primarily known for her chart-topping hits like 2004 classics "Goodies" and "1, 2 Step," and 2019's "Thinkin' Bout You." The 34-year-old is a safe and well-equipped choice to be this year's AMAs host, since it isn't her first rodeo. She regularly co-hosts Dick Clark's New Year Rockin' Eve, and, in 2016, she co-hosted the Billboard Music Awards with Ludacris.

It looks like Ciara will have a lot on her plate this year as host. Selena Gomez is set to return to the AMAs stage after a two-year hiatus and is expected to perform her new break-up track "Lose You To Love Me," believed by fans to be about Justin Bieber. Her bestie, Taylor Swift, will also be at the show, and whether she'll be able to perform a medley of her biggest hits is still up in the air amid legal drama surrounding her old label, Big Machine Records, holding control of her pre-Lover-era masters.

So much is going on and Ciara might want to keep a few one-liners on hand to diffuse any potential awko-taco moments between guests. The night will definitely be one to remember, so tune in to ABC on Nov. 24 at 8 p.m. EST to catch Ciara "Level Up" the 2019 AMAs.

More like this
Cardi B's Quotes About The Racial Pay Gap In The Entertainment Industry Needed To Be Said
By Brandy Robidoux
Justin Bieber's Response To Criticism For Including An MLK Speech On 'Justice' Is Open-Minded
By Brandy Robidoux
What Do BTS' "Film Out" Lyrics Mean In English? They're About A Past Relationship
By Michele Mendez
Stay up to date