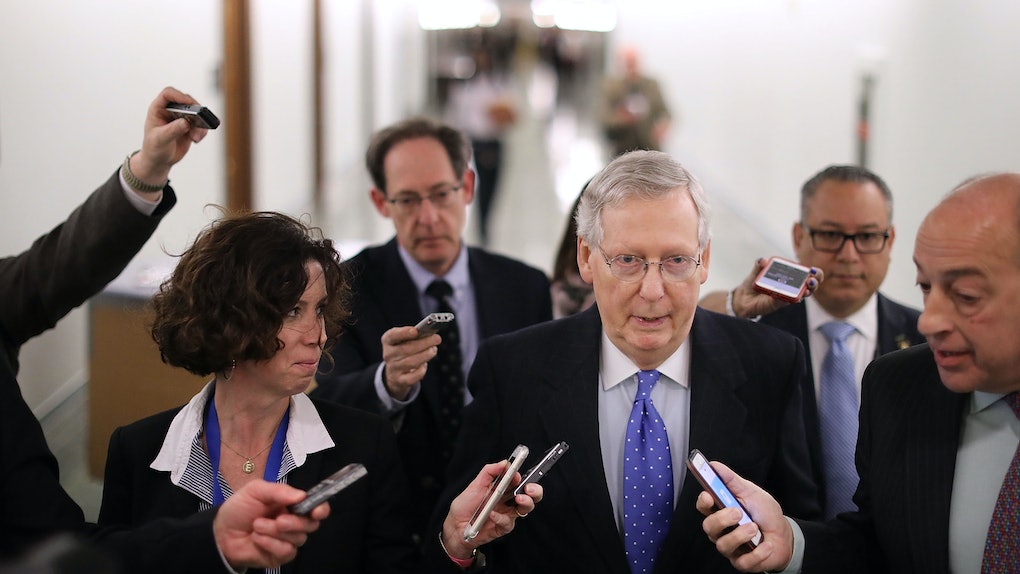 Will The Tax Bill Pass The Senate? McConnell Thinks He's Got The Votes

Drama has been boiling over whether the massive overhaul to the nation's tax code will pass the Senate. Senate Majority Leader Mitch McConnell thinks he has the votes on tax reform. The bill, which is the Senate's counterpart to the House bill passed in November, is supposed to be voted on later Friday, Dec. 1.

Per the Washington Post, no GOP senators currently have expressed outright opposition to the bill. Forty-nine of the 52 Republican senators are solid yes votes. The final three have signaled they have concerns about the bill and it remains unclear where they stand.

McConnell announced his team of Republican senators had the votes needed to pass the bill, echoing the earlier confidence expressed by Senator John Cornyn (R-TX), per the Post. The bill is highly controversial, as it could add $1.5 trillion to the national debt and give massive tax cuts to corporations.

The tax bill requires a 51-vote majority. It would take three dissenting votes by GOP senators to outweigh Vice President Mike Pence, who can serve as a tie-breaker vote for the right. Many eleventh-hour deals have been in the works to secure the votes of GOP holdouts.

On Thursday, Senator John McCain (R-AZ) was secured as a vote for the GOP. On Friday, Arizona Senator Jeff Flake announced he'd be voting yes, after withholding support over a lack of protection for Dreamers, those who were brought to the U.S. as children and receive protection under the Deferred Action for Childhood Arrivals (DACA) program. "I am pleased to announce I will vote in support of the tax reform bill," Flake announced in a statement. The tax bill also picked up support from holdout Senators Steve Daines (R-MT) and Ron Johnson (R-WI) on Friday, The New York Times reports.

Still potentially up in the air on the Republican side are Senators Susan Collins of Maine, Bob Corker of Tennessee, and Marco Rubio of Florida. The Post reports that the GOP senators are in the process of hashing out last-minute details before the vote. In an attempt to sweeten the deal for Collins, GOP leaders announced they'd meet her demand for a $10,000 property tax deduction. But it remains unclear whether this is enough to secure her vote.

Though tax reform may sound dry and insignificant, the changes on the table represent an enormous shift that could upend the American economic landscape and give a 15 percent tax break to corporations while giving only modest tax breaks for average Americans. The tax cuts would lead to an addition of $1 trillion to the national debt according to the Joint Committee on Taxation, a figure the GOP has come under scrutiny for. On Thursday, senators were discussing possibilities for how to bring that number down, per the Times, an option was taken off the table as of Friday.

A potential bipartisan compromise was also shut down. Senator Dianne Feinstein, Democrat of California, on Thursday signaled that her party's effort to reach a deal with Republicans regarding how corporations would use their tax savings to benefit employees was unsuccessful.

On Twitter, users were pushing hard to stop the bill's passage ahead of the vote. Randy Bryce, a Democratic candidate running again Paul Ryan in the 2018 elections, wrote of the Senate bill, "If it passes, everyone making less than $75,000 a year will pay more by 2027."

Even assuming the Senate bill passes, it's a long way from finished. Congressional leaders would still need to reconcile the differences between the Senate bill and the House bill, which went through in mid-November.

Per the Post, Republicans were hinting that, following Friday's vote, changes would be made to cut spending on social services such as Medicare, welfare, and Social Security.