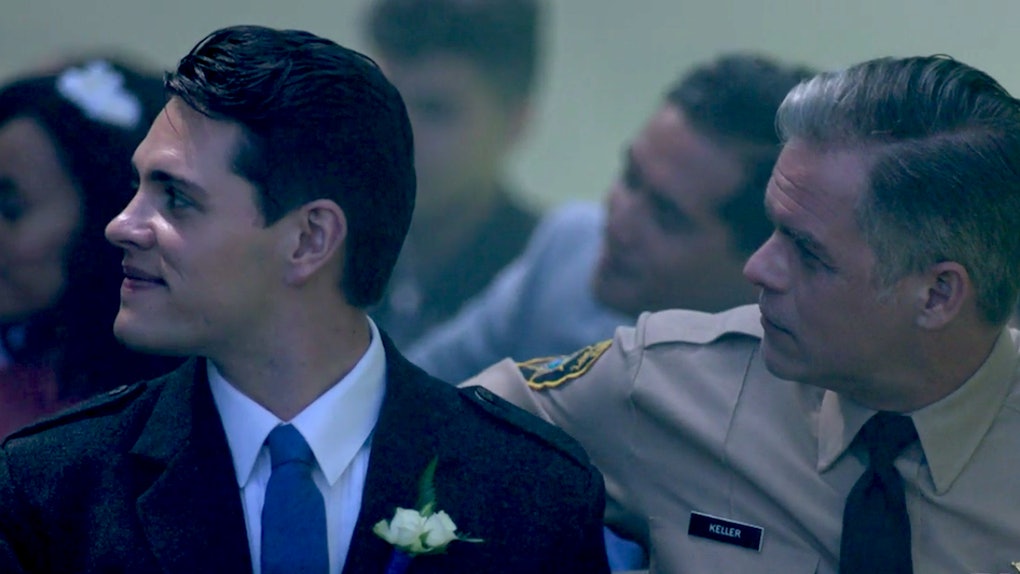 Will Sheriff Keller Be Killed Next On 'Riverdale'? All Signs Point To Yes

It looks like that darn Black Hood isn't going to stop killing people any time soon, and the most recent episode of Riverdale may have given the mysterious murderer an easy choice for his next victim. After the shocking revelations of Wednesday night's new episode "Tales from the Darkside," one of the primary Black Hood suspects is looking a lot more like a future victim rather than the killer himself. Yep — I'm saying that Sheriff Keller might be the next to die on Riverdale. It just seems like the show is setting him up as an obvious Black Hood target right now.

So, before the new episode, I think most fans of Riverdale were thinking that Sheriff Keller was a prime suspect to be the Black Hood. He is one of the only characters on the show that has the physical attributes of the Black Hood: he's an older man with a bulkier build, salt-and-pepper hair, and viewers have also made the case that he may have green eyes as well. On top of all that, it really never seemed like he was working all that hard on actually solving the case and finding the Black Hood, despite being in charge of the investigation. Finally, in Wednesday's new episode, Betty starts looking into the theory of Sheriff Keller being the Black Hood, but she discovers something else entirely.

Spoiler alert: Don't read on if you haven't seen Season 2 Episode 7 of Riverdale, "Tales from the Darkside." Betty Cooper turns her investigative eye towards Sheriff Keller, convinced that he must be the Black Hood after Kevin told her that he can hear his dad getting up late at night and driving off in his truck. But Betty's investigation actually only winds up proving Keller's innocence, as he provides her with his log book, detailing that he was actually nowhere near Fred Andrews, Ms. Grundy, Moose and Midge, or the Sugarman at the time of the Black Hood attacks. But, Betty and Veronica uncover one pretty major secret in Sheriff Keller's life: he's having an affair with Mayor McCoy. And the revelation of that affair, along with Betty clearing his name from her Black Hood suspect list, seems to add up to only one thing: Sheriff Keller is the next to die.

The looming threat of another Black Hood murder is at an all-time high at the end of the episode, as the killer calls Pop and has the diner owner relay the message that he has reaffirmed his conviction that Riverdale is overrun with sinners and that his killings will continue. Sure sounds like another murder is coming really soon, and that Sheriff Keller may be the victim. After all, we know the Black Hood hates adultery — his first victim was Fred Andrews, motivated by the fact that Fred was cheating on his wife with Hermione Lodge.

Another thing that makes Sheriff Keller a prime victim for the Black Hood is the fact that now, all the viewers are pretty well assured that he's not the Black Hood himself. Why keep him around if we can't theorize about him any more, right? The sheriff's death would also send a powerful message to Riverdale that nobody is safe from the Black Hood's judgement, which must be enticing for the killer, who we've already seen clearly loves publicity.

But mainly, the news of the affair makes Sheriff Keller the most visible "sinner" in Riverdale by what we know of the Black Hood's definition of the term, so don't expect him to be around too much longer. Thankfully, Betty Cooper is doing a much better job at cracking this case than he was, anyway.