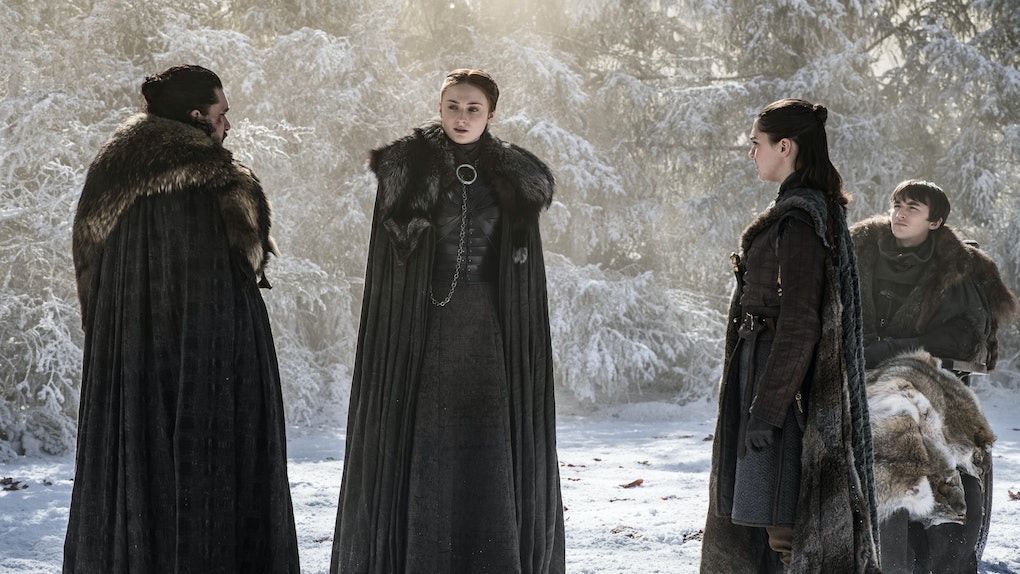 Will Sansa Get The Iron Throne? 'Game Of Thrones' Fans Are Rooting For Her

Game of Thrones' penultimate episode upended expectations when Daenerys destroyed King's Landing. Suddenly, the hero of the story, who fans had been rooting to take the Iron Throne, wasn't such a good guy anymore. The murder of thousands of innocents was on her hands, and the chances she would rule Westeros faded fast as their charred remains littered the streets. But who would step up and take her place? Could it be the best player the game has ever seen? Will Sansa get the Iron Throne? If she does, it will be done delicately.

Sansa learned well at the feet of those who didn't realize how much she absorbed from them. Between Cersei, Littlefinger, Olenna, and Margaery, Sansa observed some of the best work by those whose lived lives committed to winning the Iron Throne. Her moves this season prove it. She undermined Daenerys left and right in public, demanding how one feeds "full-grown dragons," forcing the Targaryen to admit goats and children were in danger.

When she learned Jon was a possible piece to be played, she did not rush out to tell the Arryns and the Tullys the good news. She played her cards carefully, tweaking Tyrion's interest and then handing it to him at the last second. Having spun him up, he then went to Varys, who did precisely what Sansa needed, by telling everyone for her, so the news came by a neutral third party, free of the appearance of family bias.

With that kind of string pulling from her perch in Winterfell, it's hard not to imagine Sansa will ultimately reign over Westeros. She's a brilliant politician, a sharp conciliator, and a deal maker, with a backbone of iron over the softest of fur gloves. The people would love her for her beauty, her kindness, and her commitment to her people. Those who opposed her would never get the chance to show otherwise.

But Sansa is, at this point, almost too smart for that. What is the Iron Throne, but a massively uncomfortable seat whose occupant immediate discovers a target painted on them from all sides? Olenna, for instance, was far too smart to ever aim for the throne itself. Yet she played a long game, sitting in her perch at Highgarden, waiting for the right moment to come down to the capital city, and basically take control from its gardens while noshing on lovely bits of cheese.

Sansa would not take the Iron Throne herself unless circumstances made it unavoidable. That's not her style. It's too showy, too obvious. Given her druthers, she would put someone else there she could control, a man who everyone assumes is smart but is really just smart enough to listen to the wisdom of her counsel. Tyrion Lannister would be perfect, as would Jon. Another candidate she would probably accept? Sam Tarly.

Sansa would prefer the country ruled by men who could be manipulated and controlled. One who would believe themselves to be the ones in charge, but would allow Sansa to rule the North as Lady of Winterfell, and most likely give her whatever she needed to do so in peace. She deserves it, too.