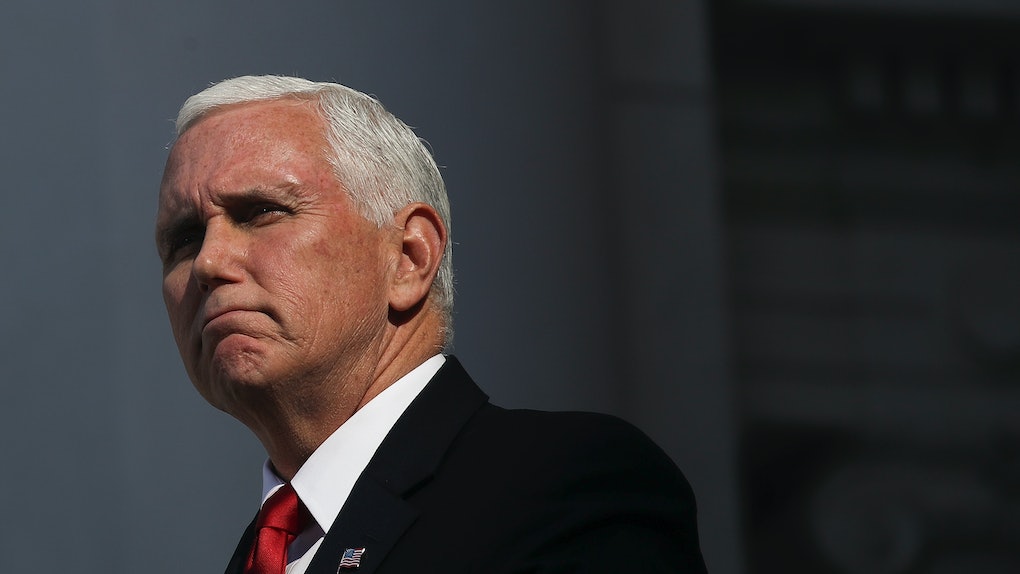 Will Mike Pence Run For President In 2020? Here's What We Know

As the impeachment inquiry against President Donald Trump moves forward, the future of the White House hangs in the balance. White House Press Secretary Stephanie Grisham referred to the inquiry as Democrats' way to "weaponize politics" in an emailed statement to Elite Daily on Sept. 24, but that hasn't stopped some people's speculation about whether President Trump will be impeached. If that's the case, will Mike Pence run for president in 2020? Well, he'll definitely be on the ballot, at least.

So far, there's no word on whether Vice President Pence plans to run in the 2020 presidential election if President Trump is impeached. But if he does, the timing would be difficult. Deadlines to appear on primary ballots are starting to slip by, meaning that if Pence does want to run in the primary elections, he's about to miss his window — as of Nov. 24, deadlines in Alabama, Arkansas, and New Hampshire have passed. The White House did not immediately respond to Elite Daily's request for comment on whether Pence would consider running should Trump be impeached.

It's not odd to be wondering if Pence will top the ticket in 2020. If a president is impeached, the vice president takes on the office of the president, so it makes sense to wonder if Pence might run for re-election in Trump's place. But the guessing game is probably premature, given that the House has not yet actually taken a vote on whether to impeach Trump. Although there's no set timeframe for impeachment, it's likely that the next step, the Senate trial, would also take quite a bit of time.

However, you can expect Pence on the vice presidential ticket come the 2020 race. President Trump confirmed on Aug. 22 that Pence would remain his running mate in the next election, following a June 23 Wall Street Journal op-ed suggesting Trump should replace Pence with former ambassador to the United Nations, Nikki Haley. Trump addressed the op-ed while appearing on FOX Business, in which he expressed his admiration for Haley, but said he doesn't have any plans to switch up the ticket. Trump said,

Pence has been an outspoken critic of the impeachment inquiry towards the president, and has defended Trump's July 25 phone call with Ukrainian President Volodymyr Zelensky, in which Trump asked the foreign leader to investigate former Vice President Joe Biden, who is a Democratic candidate for president in 2020. While speaking in New Hampshire on Thursday, Nov. 7 as a part of Trump's 2020 re-election campaign, Pence stated that the president "did nothing wrong." Pence said,

While Trump may be at the center of political drama at the moment, Pence has also had his fair share of controversies. The vice president has been an opponent of LGBTQ rights, opposing legalizing same-sex marriage (which passed in the United States in June 2015 by the Supreme Court) and more recently praising a proposed Trump administration rule that would allow adoption agencies that refuse services to LGBTQ couples to receive federal funds. Pence said at a Nov. 13 event for the Department of Health and Human Services, "We will stand for the freedom of religion and we will stand with faith-based organizations to support adoption."