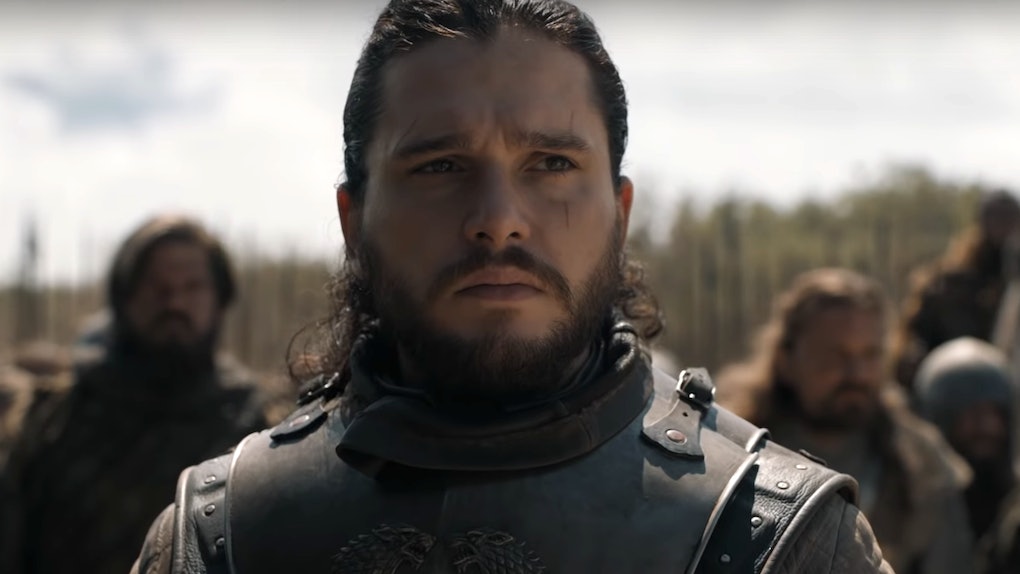 Will Jon Snow Die In 'Game Of Thrones' Season 8 Episode 5? This Detail Has Fans Convinced

Now that we are headed into the final two episodes of Game of Thrones, every fan is wondering which characters will survive and which will die before seeing how this whole epic ends. In a show full of confusing prophecies and cryptic symbolism, no potential clue is too small to launch a compelling fan theory, and that is why one scene from last Sunday's episode has fans wondering if Jon Snow's death is imminent. So, will Jon Snow die in Game of Thrones Season 8 Episode 5? Here is why some fans think his fate is sealed.

Spoiler alert: This post contains spoilers from Game of Thrones Season 8 Episode 4, "The Last of the Starks." At this point, Jon Snow has pretty much become Game of Thrones' de facto protagonist and the most likely character to end up on the Iron Throne since learning the truth about his identity, but when has Game of Thrones ever done what is expected? A new fan theory laid out on ComicBook.com points to a couple of scenes in the latest episode as signs that Jon Snow may be killed in the upcoming battle for the Iron Throne.

The theory underlines the importance of animals within the Game of Thrones world. Most notably, the journey of each Stark closely mirrors the journey of their respective direwolf, and Daenerys' dragons have also developed important special connections with certain characters. So, it did not seem to be a great omen when both of the animals that bonded with Jon Snow disappeared in Episode 4. Jon sent Ghost away to live in the North with the Freefolk, and then his dragon Rhaegal (named after Jon's father) was suddenly killed by Euron Greyjoy. The loss of both animals has fans thinking that the show is foreshadowing Jon's death in the next episode.

There certainly is a precedence for Game of Thrones connecting animal deaths with the deaths of their human counterparts. Both Robb Stark and Rickon Stark were killed by the same people who killed their direwolves Grey Wind and Shaggydog, and at around the same times as well. Additionally, the Night King's dragon Viserion died at the same time that he did.

But this theory also has some major holes in it. Both Sansa Stark and Bran Stark's direwolves Lady and Summer were killed, but their human counterparts live on. And of course, Ghost is not actually dead, just moving out of the picture. With all of this information, it actually seems like the more plausible theory is that Jon Snow will survive the final battle but then choose to move north of the Wall rather than take the Iron Throne.

The reasoning behind this other theory is how closely the direwolves lives mirror those of their human counterparts. Both Sansa and Bran lost their direwolves at hugely transformative moments in their lives: Sansa about to move to King's Landing as Joffrey's bride and Bran assuming the identity of the Three-Eyed Raven. It could be argued that the direwolf deaths translated to a symbolic death for both Starks, with Sansa shedding her naive innocence and Bran becoming an all-seeing prophet. As for Arya's direwolf Nymeria, we see clearly that the two have mirrored journeys. Just as Arya set off on her own, so too did Nymeria, also asserting her independence and "lone wolf" mentality.

So, if the direwolf journey really does mirror the Stark journey, then Jon Snow may be following Ghost up north after everything is settled in Westeros, and Rhaegal's death may have just been a symbolic death for Jon signifying a new identity for him. Then again... who knows what the final two episodes have in store — we will have to wait to know for sure what happens.