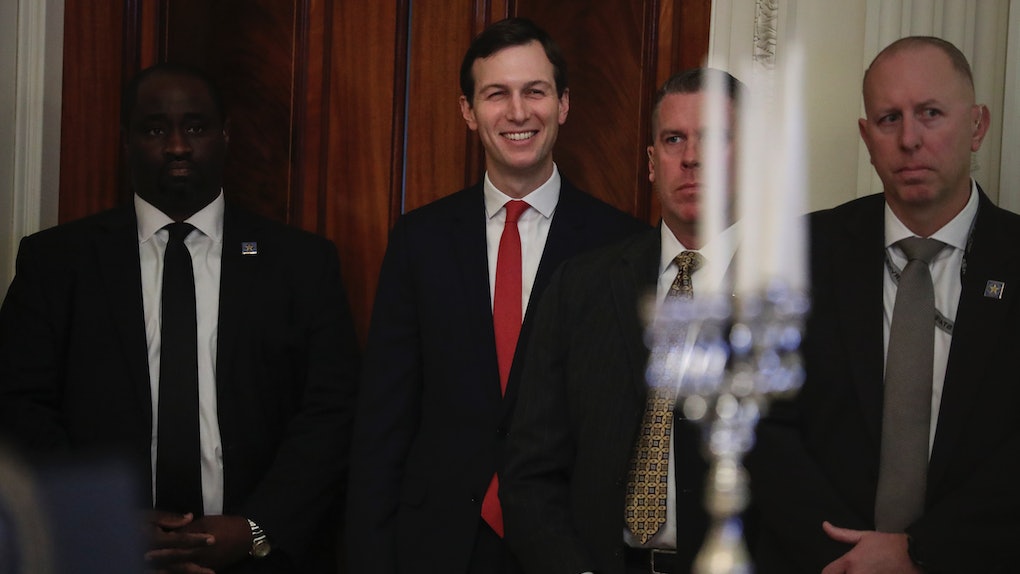 Will Jared Kushner Be Trump's Chief Of Staff? He's Being Considered, Reports Say

For those of you watching along at home, President Donald Trump's search for a willing and eligible chief of staff comes complete with the memorable characters, the behind-the-back gossip, and all the tantalizing drama you'd expect from The Bachelor — except there's no eager crowd of candidates to choose from. The week draws to a close with the president apparently no nearer to finding a replacement for John Kelly, who'll be leaving at the end of the year. But the president's own son-in-law, Jared Kushner, is being considered for chief of staff, according to reports.

Huffington Post reported on Thursday, Dec. 13 that Kushner, currently serving as a senior adviser in the White House, had sat for a meeting with Trump about the role on Wednesday. But even the question of whether Kushner is in fact in the running for the top staffing job in Washington is unfolding like a will-they-won't-they made-for-TV romance, thanks to conflicting reports. CBS' Major Garrett reportedly got confirmation that Kushner was under consideration for the role, while The Washington Post's Josh Dawsey says a White House official denied the rumor, and Bloomberg reports that two White House aides did as well.

Elite Daily reached out to the White House for comment and clarification on the situation but did not hear back at time of publication.

The fact that Trump is struggling to fill the role has left many veteran political reporters and political staffers stunned, and the rumor that Kushner's being considered at all has a lot of people raising their eyebrows. "Ah yes, of course, it's classic Republican 'bootstrap' meritocracy," wrote incoming Rep. Alexandria Ocasio-Cortez on Twitter, "where the smartest, hardest-working, most fitting person for the job just so happens to be your son-in-law."

But if he's going to be up for consideration. Kushner has a pretty glaring obstacle in front of him, as Rep. Ted Lieu points out: He's only got moderate security clearance after his status was downgraded earlier this year. The White House did not immediately respond to Elite Daily's questions about Kushner's security clearance.

Per CNN, Trump told reporters on Wednesday: "I have at least 10, 12 — 12 people that want it badly. I'm making a decision. Great people," he said. "I could do it immediately. I'm in no rush. A lot of people want it." But then by Thursday, Trump said he had five "terrific people" under consideration.

It's been a rocky road to find a replacement. Since Kelly's departure was announced on Saturday, Nick Ayers, chief of staff to Vice President Mike Pence, turned down the job, while Trump rejected the possibility of Rep. Mark Meadows, a member of Congress' conservative Freedom Caucus, taking the position. Trump has also met with former New Jersey Governor Chris Christie, per Bloomberg, and is scheduled to meet with his former deputy campaign manager David Bossie. Other names that have been rumored to be under consideration are Acting Attorney General Matthew Whitaker, U.S. Trade Representative Lighthizer, economic adviser Larry Kudlow, Treasury Secretary Steven Mnuchin, and White House Counselor Kellyanne Conway.

Politico is also reporting that Kushner and his wife Ivanka, the president's eldest daughter, are also the last line of defense in Trump's staffing choices. "Kelly was the last one they wanted out," a former White House official told Politico. Apparently, the official added, "it's not just the president" who must approve his next chief of staff — "It's Jared and Ivanka. They have a big voice."

So is Kushner really in the running? Who knows. But if the last two years have taught us anything, it's exactly the kind of plot twist you'd expect coming out of 1600 Pennsylvania Ave.