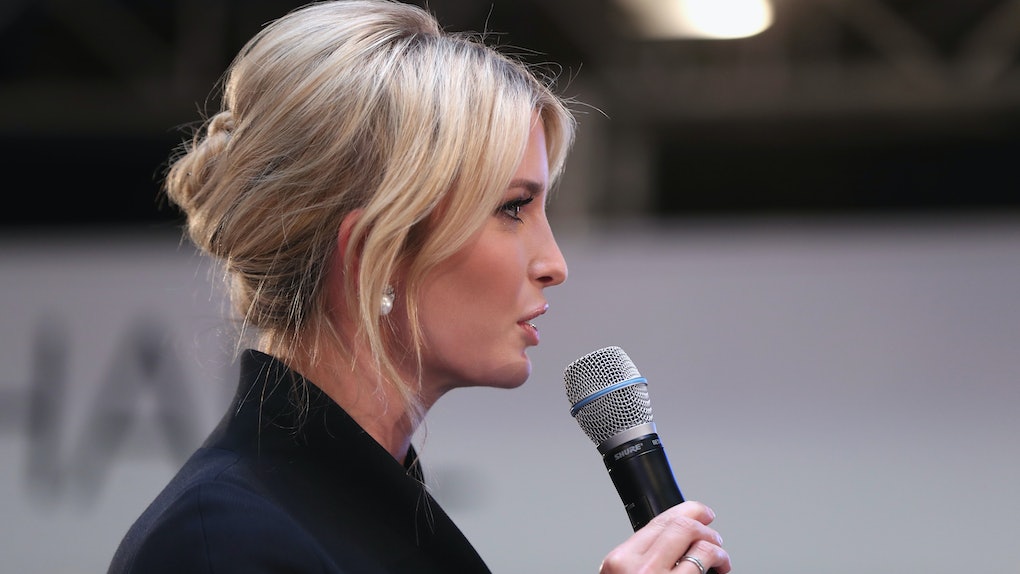 Will Ivanka Trump Testify Before Congress? It's Not Impossible

President Donald Trump's former personal fixer and attorney of a decade, Michael Cohen, is on Capitol Hill Thursday for what is the last day of his three-day gauntlet in testimony before Congress. But it's not just Cohen who is top of mind for the committees investigating possible wrongdoing by people surrounding the president. Following a bombshell public hearing on Wednesday, the next question is: Will Ivanka Trump testify before Congress following the Cohen drama? Rep. Elijah Cummings, chairman of the House Oversight Committee, has reportedly said it's an option that's very much on the table.

Reporters on Capitol Hill followed up with Cummings Thursday to hear what his plans were following a stunning testimony by Cohen on Wednesday. "Cummings ... said that if people were named at the hearing yesterday, they can expect to hear from the committee one way or the other," CNN's Manu Raju reported via Twitter on Thursday. Washington Post reporter Rachael Bade also tweeted that Cummings had said that people who Cohen had mentioned might be called to testify. Elite Daily was not able to independently verify this as multiple attempts to reach Rep. Cummings for comment on Thursday was unsuccessful, nor was a request for comment from the White House.

And here's the rub: The people Cohen mentioned were basically the most high-profile individuals close to the president and his business as you can get. Ivanka, along with her brothers Eric and Don Jr., were mentioned by Cohen during the hearing, so if Cummings is to be taken at his word, it's reasonable to expect that all three of them will be asked to appear before the committee.

Although she currently serves as an adviser to her father in the White House, Ivanka has held a well-documented role in the family business — and specifically was reportedly aware of the Trump Tower Moscow deal, which has been one of the foci of the investigations into the alleged connections between Trump and Russia. The White House had not provided a request for comment on this topic as of publication.

In the hearing Wednesday, Cummings led what amounted to a jaw-dropping next chapter surrounding Trump's inner circle. The scene inside the House hearing saw a heated argument about race escalate to the point of near yelling, Cohen breaking down and crying during closing statements, a poignant monologue by Cummings, and a string of stunning accusations by Cohen against his former boss.

During the course of his testimony, Cohen implicated Trump — and potentially the three Trump children involved in the family business by extension — in a slew of possibly criminal activities, including making hush money payments to women who'd claimed to have affairs with Trump prior to the election (Trump admitted to authorizing the payments but denied any affair).

Although it wouldn't have constituted potentially illegal activity, one of the main topics of interest for the House committee was the organization's push for a Trump Tower Moscow deal, which continued well into the 2016 election cycle. (Trump himself said that this was "very legal" in a 2018 tweet.) Cohen, during testimony, said that the Trump business was pushing ahead with this negotiation because Trump didn't think he would actually win the presidency. The White House did not respond to Elite Daily's request for comment on the subject. That business included Trump's eldest three children, whom Cohen said were present for numerous briefings about the status of the project.

Cohen also indicated it was possible that those three Trump children would've been similarly compromised or in a potential conflict of interest for their involvement in that project leading up to the election.

Cohen's mention of Ivanka Trump in itself doesn't prove anything, and Ivanka has maintained her ignorance of the topic. Just a couple of weeks ago, on Feb. 8, Ivanka told ABC News that she knew "literally almost nothing" about the Moscow project, in line with her ongoing position that her knowledge of the deal was cursory.

However, based on what Chairman Cummings has suggested to reporters, it appears likely that she'll at least be called forward to tell the committee what she knows — and doesn't know — about her father's business and connections. And that might not be her only requested testimony: Rep. Jackie Speier of the House Judiciary Committee told MSNBC on Wednesday that Ivanka was on her list, too. (The White House had also not responded to questions about whether Ivanka would be willing to testify if called to do so.) So while nothing is for sure yet, there are indications that the eldest Trump daughter could have a few appearances to make on the Hill before too long.