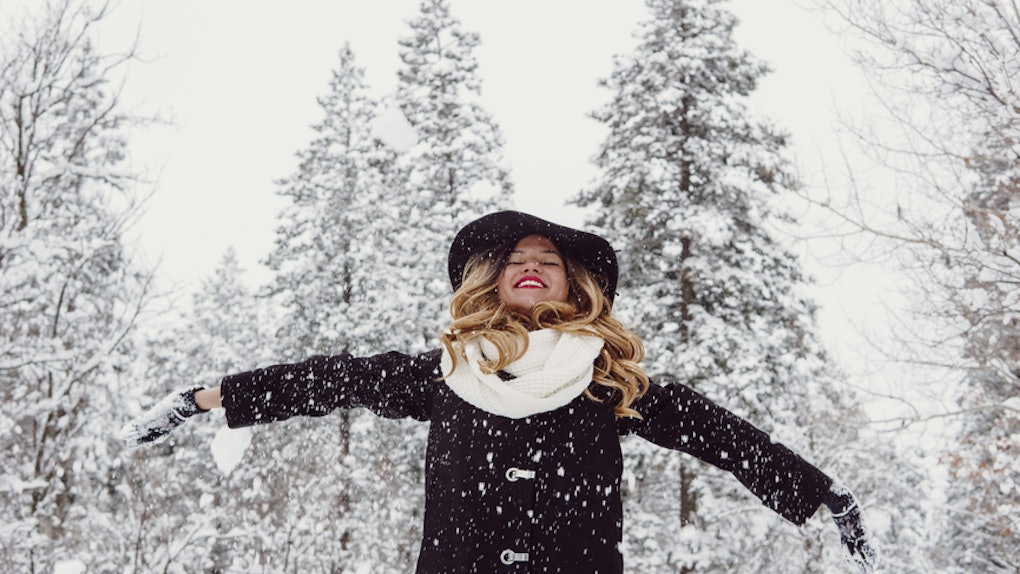 Will It Snow On Christmas? These Lucky States Might See A Winter Wonderland

Every year, thousands of Americans go to sleep on Christmas Eve with the hopes of waking up to a few inches of snow. In other words, they're dreaming of a white Christmas (thanks, Irving Berlin). Of course, depending on where you live, the likelihood of glimpsing a winter wonderland will vary — but some early weather reports are providing some insight into the annual question: Will it snow on Christmas?

In some areas of the country, a white Christmas is nearly guaranteed. According to CNN, Crested Butte, Colorado has a 99% historical chance of having 1 inch of snow on Christmas. TBH, that sounds perfect to me — a white Christmas without any serious weather delays or dangers. But even though Crested Butte will likely see some flakes — and we tend to think of Colorado as a snowboarding mecca — some areas of the state, like Denver, may not even see flurries.

However, different sources are predicting different outcomes. CNN's European weather model for Christmas Day is predicting that it will snow in Denver. The model is also predicting snow in all of New England, as well as New York state and Pennsylvania. Meanwhile, the American model is predicting lighter snow in these areas. The primary differences shown on the model are in the amount of precipitation, i.e. light snow versus heavy snow.

Other parts of the country can be a bit more unpredictable. Although you probably wouldn't think of putting the words "white Christmas" and "Texas" together in the same sentence, The New York Times reports that the Lone Star State received up to five inches of snow in some areas on Dec. 8. The same storm system also brought snow to Alabama, Louisiana, and Mississippi. Again, not exactly places that immediately come to mind when you hear the words "winter wonderland."

Although nothing is guaranteed, Texas news station KXAN has reported that temperatures may dip below freezing in central Texas on Christmas, and that there is a chance of precipitation. Whether or not the combination results in snow will depend on if the temperature actually does dip that low. However, there are no predictions of snow in other areas of the South at this time. Even Atlanta, which is further north and typically more likely to see snow, is not currently projected to see any, despite temperatures plunging "below normal across most of the country," according to CNN.

The European model also shows that the Midwest will receive some snow, but probably not as much as what is anticipated on Saturday, Dec. 23. And Travel and Leisure reports that the Northwestern part of the country could see some flurries, too, specifically coastal cities in Washington.

For the most part, the prospects are looking pretty bleak for a white Christmas, at least in most parts of the country. And according to Newsweek, the Southwest and Florida will experience warmer than normal temperatures during Christmas week. Same goes for Alaska, where temperatures may be as much as 70 percent higher than average. Not only is this a bummer for anyone looking to really be in the Christmas spirit, but the implications for the overall climate are also concerning.

If your home state (or wherever you are this holiday) is set to be hit with some snow, you're bound to take a million pics. Some people like to run outside right away and get some shots of it all coming down as it happens; others prefer to sit inside and watch it come down, and snap the pics later when things are nice and still. Whatever your preference, make sure that you've got a jacket, gloves, and a million snow puns for the perfect Insta caption.