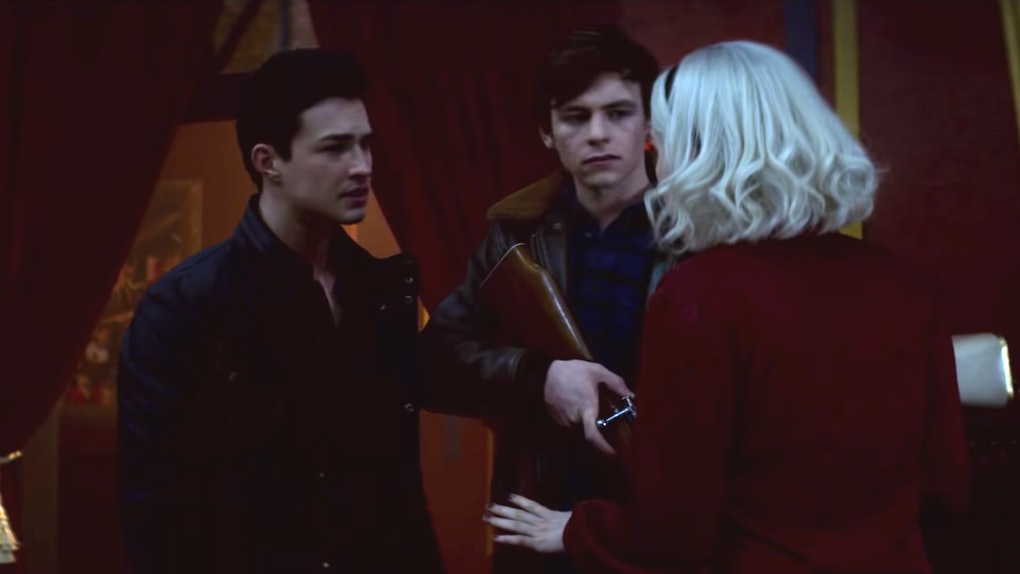 Will Harvey & Roz Date? A New 'Chilling Adventures Of Sabrina' Couple Seems To Be Forming

The first part of Chilling Adventures of Sabrina may have ended in a major breakup, but love is in the air once again for both Sabrina and Harvey at the beginning of Part 2... not with each other, though. It is no real surprise that Sabrina has moved on to explore her feelings for her warlock classmate Nick Scratch, but Harvey might be moving on from Sabrina as well. The first episode of Chilling Adventures of Sabrina Part 2 has everyone wondering will Harvey date Roz after one unexpected scene.

Spoiler alert: This post contains plot details from the first episode of Chilling Adventures of Sabrina Part 2. The new season of Chilling Adventures of Sabrina gets off to a sad start for fans of Sabrina and Harvey's relationship. The couple broke up in the final episode of Part 1, after Sabrina revealed the truth about her powers to Harvey and signed her name to the Book of the Beast. In Part 2, Sabrina and Harvey are more split up than ever, with Sabrina opting to fully immerse herself in her witchy studies and completely ignore her mortal friends. That also means that Sabrina's flirtation with Nick Scratch is finally free to actually develop into a relationship, which seems to get started right away.

But Harvey is not left alone after the breakup either. When he and Roz go out to eat together, Roz has a vision of the two of them making out in the school hallway.

This comes as a shock to Roz, and she chooses not to tell Harvey about it. But the vision seems to reveal the next new Chilling Adventures of Sabrina romance that is on the horizon. The hook-up is a shock to fans of the show, since Harvey and Roz were never shown to have any inkling of romantic feelings toward one another throughout all of Season 1, but it would make sense that both of the friends might find solace in one another after losing Sabrina.

These new relationships also foreshadow some major romantic tension as the new season moves forward. It is hard to imagine Sabrina being super comfortable with her best friend dating her recent ex-boyfriend, and on the other side of things, Harvey might feel inadequate now that Sabrina is dating a fellow warlock instead of him. There is also the undeniable chemistry that Sabrina and Harvey still share, and the fact that their breakup was not about falling out of love. Many fans are still holding out hope that Sabrina and Harvey could get back together, but that would now also entail devastation for Nick and Roz.

Since we know Roz's visions are bound to come true, her kiss with Harvey is about to happen soon. And Sabrina and Nick are getting so much closer after working together to foil Father Blackwood's Top Boy competition. So get ready for the sparks of new romance to start flying, and all the drama that these new relationships entail to come soon afterwards.