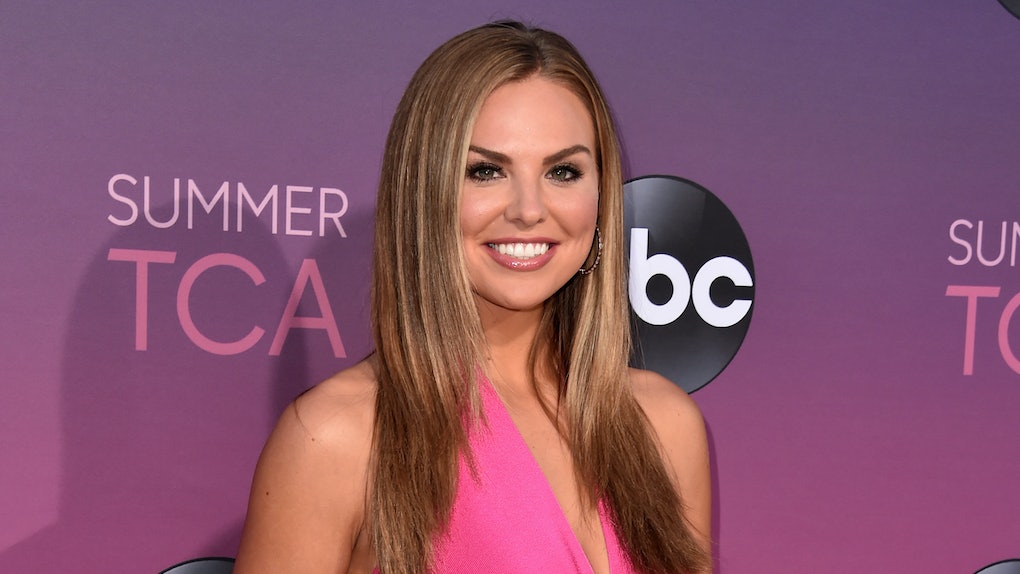 Will Hannah Brown Be On 'Dancing With The Stars'? The Bachelorette Has Moves

The television world loves a good crossover, and one show that shines when bringing together familiar faces is Dancing with the Stars. Coming up on its 28th season, the dancing competition show is poised to bring viewers another exciting round of twirls, leaps, and poses carried out by some of today's most familiar faces. While the full cast list is still under wraps as of Aug. 19, the show's Instagram account has been posting hints, and thanks to one hint in particular, fans are convinced a certain Bachelorette will be making an appearance. So, will Hannah Brown be on Dancing with the Stars? Here are the clues she will be hitting the dance floor soon.

Leading up to the Dancing with the Stars premiere, the show has been teasing which celebrities will be competing on the show. The full cast will be announced on Good Morning America on Wednesday, Aug. 21, but until then, fans have been having a ball guessing which stars will be competing.

While some of the hints have been a little difficult, one Instagram post from the Dancing with the Stars account seems pretty clear. On Sept. 17, the account posted a black-and-white photo of a woman's torso, accompanied by the caption: "We’d LOVE to tell you who this is… But we’re going to make you wait a few more days. 😏 Any guesses? #DWTS"

The comments section is almost unanimously sure the woman in the photos is none other than Bachelorette Brown, and they've got some pretty convincing reasoning.

"That’s deff Hannah I looked at her most recent she’s got the same hand freckles," one person commented, while another wrote, "I can confirm this is Hannah B. because of the beauty marks on her neck and right shoulder."

If these eagle-eyed fans' observations aren't proof enough, US Weekly reported Brown will indeed compete on the show, according to "multiple sources." E! News also reported on the casting rumor; however, ABC did not respond to Elite Daily's request for comment at the time of publication.

On Twitter, where the photo clue was also posted, fans weighed in on whether they think the woman in the photo is Brown, and how they feel about her potentially joining the ballroom competition show.

If she is in fact part of the DWTS cast, there's a good chance Brown could go far. A trained dancer and beauty pageant queen, she definitely knows her way around a stage, and even if she learned styles other than ballroom, it's likely whatever dance background she has will give her a leg up (possibly literally) on the competition.

Of course, considering how her love life turned out after her season on the Bachelorette, her fans are hoping this next reality show stint could also serve as another shot at romance. Though it's not clear yet who will be her dancing partner, people are already hoping whoever it is will end up being a match for her.

Other fans are hoping she'll have some sparks with a fellow celebrity competitor... perhaps one she's already met before.

If you'll recall, before he was dating supermodels or winning the hearts of millions as a contestant on The Bachelorette, Tyler Cameron was a college football player who took dance classes to beef up his GPA. As he revealed on the show, he came to love dancing, and even almost earned a minor in dance. If Cameron ended up on the show, not only would fans be able to marvel at his talents, but they may even get to watch him and Hannah reconnect onscreen.

Fans will learn the truth soon enough, but until then, they're having plenty of fun speculating about who will be foxtrotting their ways onto their TV screens come September.

The 28th season of Dancing with the Stars will premiere on Monday, Sept. 16, on ABC.