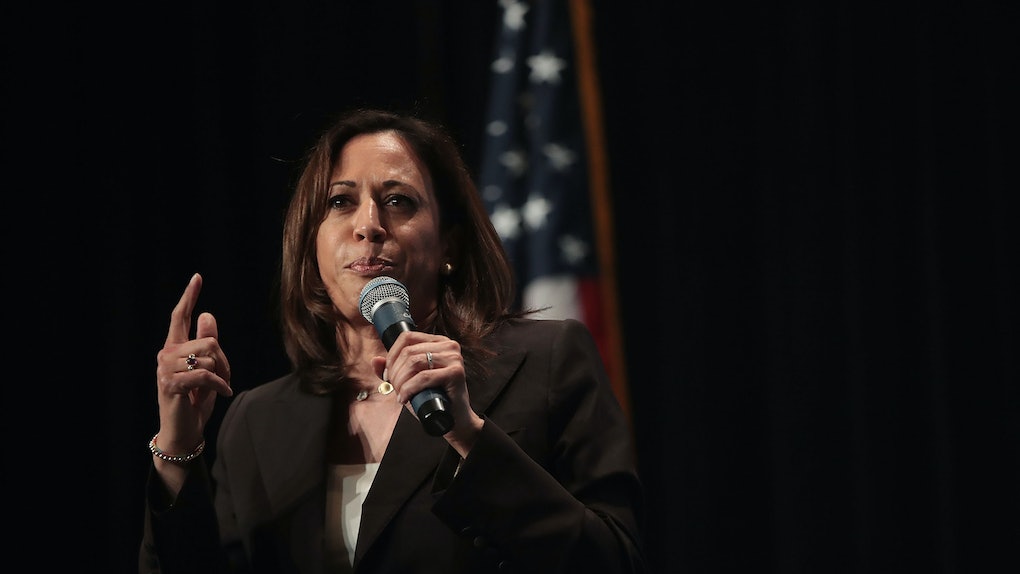 Will Donald Trump Be Charged By The DOJ After 2020? Kamala Harris Seems To Think So

Special counsel Robert Mueller may have formally closed his investigation into Donald Trump and his campaign team, but that doesn't mean people have stopped talking about it. Whispers of impeachment and whether charges will be filed have been circling for months, but will Donald Trump be charged by the DOJ after 2020? A certain California senator is sure of it.

On Wednesday, June 12, NPR published an interview with Harris discussing Mueller's investigation and the possibility of Trump being charged with obstruction of justice in the future. Once NPR's Scott Detrow asked Harris whether she believes the Department of Justice (DOJ) will charge Trump following the 2020 presidential election, the California senator was straightforward in her answer, saying that if she won the presidency in 2020 the DOJ would have to. She,

The White House did not immediately respond to Elite Daily's request for comment or a response to her remarks.

DOJ policy holds that a sitting president cannot be indicted to prevent instability in the government. In fact, Mueller himself cited that policy while making his first public statement about his report on May 29. However, that policy does not apply when a president leaves office, meaning that a president who committed a crime would be vulnerable to prosecution after his or her time in office. Trump, who is in his first term, is mounting a re-election campaign, which should he win in 2020 would keep him in office through 2024. As of publication, Trump has not been formally accused of nor charged with any crime.

Notably, the Mueller report found that while the Trump 2016 campaign did not actively collude with Russia, it had expected to benefit from Russian election interference. The report also expressly did not exonerate the president regarding obstruction of justice. The White House did not previously respond to Elite Daily's request for comment on the report details.

While the possibility of Trump being charged by the DOJ isn't until the far future, rumors that the president could face impeachment are still being pushed by Democrats within the nation. Harris herself has called for Trump to be impeached following the public release of Mueller's report (if a redacted version) on April 18. She isn't the only one; fellow Democratic presidential candidates, including Massachusetts Sen. Elizabeth Warren, New York Sen. Kirsten Gillibrand, and New Jersey Sen. Cory Booker have also pushed for the move.

Clearly, there are quite a few powerful voices who think impeachment is the best route to take, but even Mueller himself made a sly comment that might have referred to the action. During his public statement, Mueller did point out the DOJ's policy was a big reason why his team didn't make a call on obstruction of justice. However, the special counsel later commented on another process that could accuse Trump of a crime — basically, impeachment. "The Constitution requires a process other than the criminal justice system to formally accuse a sitting president of wrongdoing," Mueller said during his statement.

As of June 12, no serious impeachment proceedings have begun regarding president Trump.

Others might think impeachment is a possibility for Trump, but the president himself seems to think otherwise. Since the Mueller investigation started, Trump has pointedly stated that his team committed no collusion with Russian operatives during the 2016 presidential election, and has pushed back against allegations that he might be impeached. Trump addressed the matter while speaking to the 2019 Indianapolis 500 champion on June 10, where he made an interesting comparison to his current situation to the infamous Watergate scandal. He said,

We have no collusion, no obstruction, no anything. When you look at past impeachments, whether it was President Clinton or — I guess President Nixon never got there. He left. I don’t leave. A big difference. I don’t leave.

There have been lots of rumors floating around the political sphere for a while, but clearly Trump is vehement that he "doesn't leave." I wonder what Harris has to say about that.